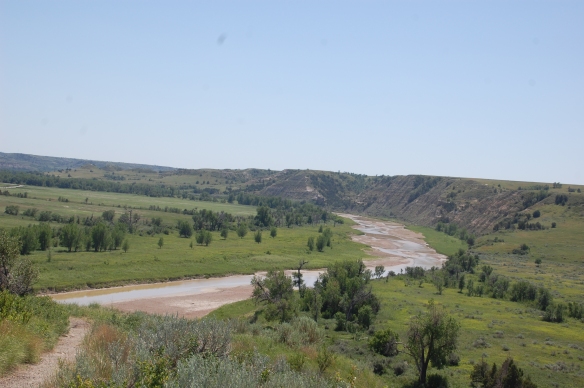 The Badlands Motel. I really wish we were staying there. Or at least that was what I was thinking as we fled the outdoor Medora Musical (a show cut short due to the swirling lightning and dark, dark overhead skies). The road back to the campground was a winding five miles in the dark with massive elk (their shape illuminated by lightning) grazing in a meadow. At the campground entrance a bison stood by the side of the road as if to greet us.

Once at our site we waited out the coming storm. Henna read in the front seat and I fiddled with the stove to boil up some hotdogs. Corey and I moved the camp chairs next to the car and watched the northern sky explode, a constant flicker whose flame was only intermittently heard. The southern sky was not much better and also maybe closer as the thunder was much louder. A few drops, a lot of wind, but the storm never quite reached us. Neither did the bison. As we set up camp the host told us that they often wander through the campground, especially at night. He said just don’t bother them and they won’t bother you. I heard, a bison will stomp on your tent while you lay sleeping. On an earlier hike to the Little Missouri River we were surprised by a dozen or so of those big suckers grazing a few feet from our car. Corey and Henna took pictures from the car while I frantically begged Corey to drive away. Looking back, I think that may have been the first time that I longed for the motel. 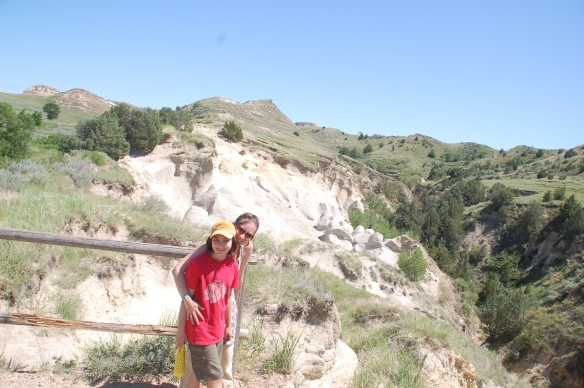 It was hot too. Like mid 90s unrelenting hot with nowhere near enough cotton woods to offer shade. We found ourselves post-ice cream with two hours to kill before the musical. So we made dinner in a picnic area, strolled a western-themed book store, and played in the park which was almost as nice as taking a late afternoon nap in AC cooled motel room while Henna surfed the channel for cooking shows.

When I took my nightly stroll to the bathroom the half-moon shone as bright as the sun.  The world was silent and the cold wind was constant. But yet the ground still felt warm on my bare feet. As I crawled back into my sleeping bag I was startled by the riotous call of a thousand birds. There was nowhere else I wanted to be. 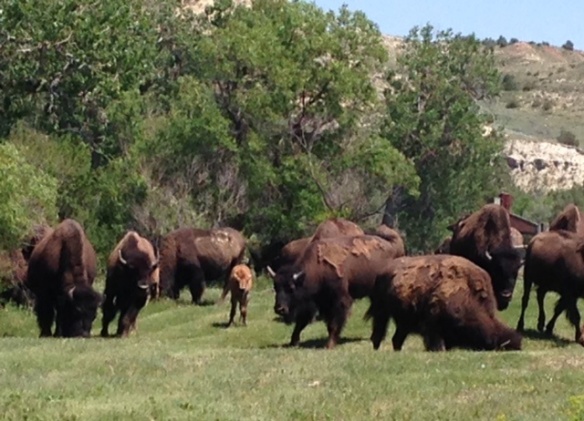