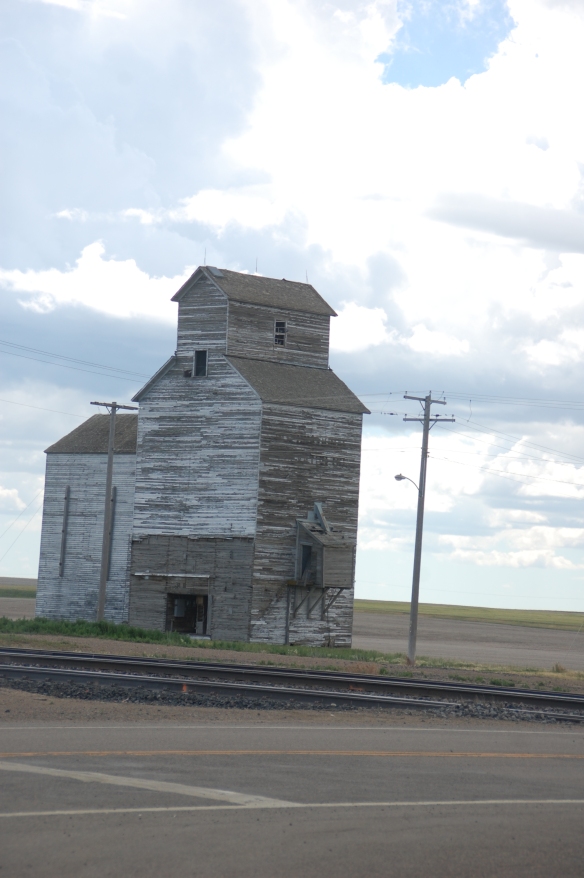 The pebble hit our windshield like a rifle shot and left behind a distinct dent in the glass. Luckily the wound was to the periphery and did not in any way obscure our vision. But Blue Eyes, the last vehicle we drove to Alaska, received a similar injury years ago. This winter the crack finally expanded across the entire windshield. We feared a similar, more immediate fate for Subie.

The hit occurred Saturday as we drove hundreds of miles from the North Dakota Badlands right up to the border of Canada before veering west via Highway 2 or, as it is more commonly known, the Hi-Line. The original Hi-Line was the rail road track running parallel to the highway. Once referred to as The Great American Desert, the rail road rebranded northern Montana as a potential bread basket that could rival Iowa. The U.S. government then gave away parcels of land to anyone willing to stay a year and make improvements. People came from all over the world to strike it rich in the land of opportunity. Almost everyone failed. The few that stayed consolidated land and traded crops for ranching. The few surviving towns, like Malta, now intermix with virtual ghost town where dogs roam the boarded up downtowns.

For our drive the weather was a constant change with us moving in an out of rain every twenty minutes. Many times we were in sunshine (temperature a low seventies), the rain a few miles ahead of us, a distinct smudge bridging the storm clouds and the earth. Then we would come into the storm and the temperature would drop twenty degrees while the blue sky teased us ahead. Over and over this pattern repeated with the rock hitting us during a rainy streak. 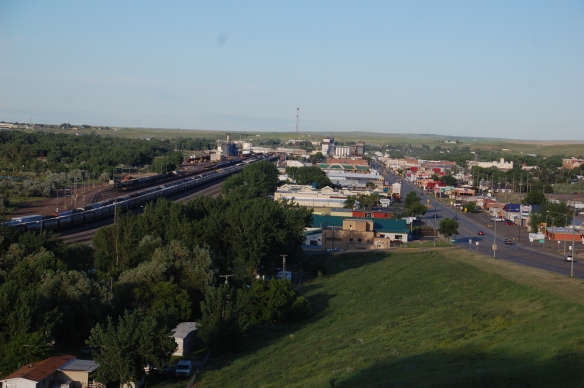 Luckily we made into Havre without the spider web crack expanding. Havre, a true oasis on the dusty Highway 2, has a special significance for Corey and I. Many years ago, on very hot and similarly unwelcoming day, we holed up here for the night and forgot all our travel worries. For many years after, whenever the road seemed especially tough, we would wish aloud for another Havre.

That night was no different and in the morning we tended to our windshield. Being Sunday, every mechanic was closed but we did find a fix-yourself-kit. The resin took an hour to dry so we took in the Wahkpa Chugn Archaeological Site which showcases how various Native American tribes used the area as a “Buffalo Jump.” In short they would panic them over the cliff then butcher them in the hundreds. Tribes would then camp out for up two months feasting on their handiwork.

So the road gives and the road takes. So far our crack is holding but it is going to need a touch up before winter. If not for the bump in the road we would have passed on the Buffalo Jump site. Crack remains contained until we get home it was all worth it. If not… well nothing we can do about it now.