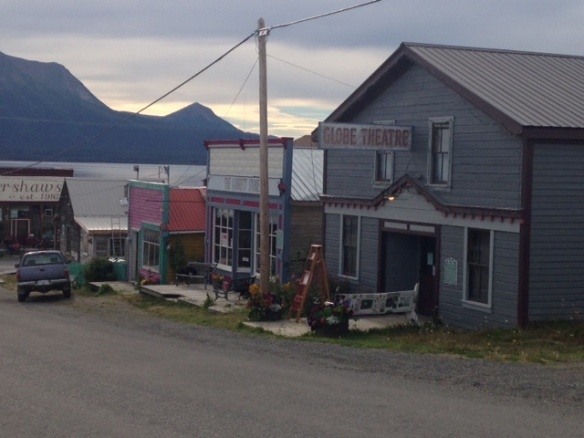 As our friend Eric would say, Atlin has seen some shit.  It has been a gold mining town (population at least 5,000), an off the beaten path tourist destination for rich folks with them spending the night in a grand lodge, and then a virtual ghost town all before the mid 1930s. That was when the depression hit and suddenly there was a shortage of tourists willing to take a train to Whitehorse and then a series of boats to the “Switzerland of the North.” Atlin was reconnected to the outside world in 1951 via a 60-mile gravel road extending from the Alaskan Highway. When Corey and I drove it in 2002 the road was pretty good but still mostly gravel. At the time we marveled at the nicely kept up frontier style buildings and wondered where all the people were. This time through the road was recently paved and felt a whole lot more connected to the outside world.  We also met a few residents. A lot of them are Americans and even more of them are artists. During the summer they live in the surrounding hillside then return home before winter comes. Those that do live year round (about 450) keep themselves stocked up. But the road is plowed and the winters are much milder in Atlin than they are in Whitehorse.  A lot of properties were for sale and we saw prices ranging from $65,000 (century old miner’s cabin without running water) to $1.2 million (a large solar and wind powered mansion that included a private lake).  An incredibly sleepy town, Atiln wakes up for one weekend in July when the Atlin Music Festival draws thousands of people.

The volunteered run campground is just $10 a night and paid on the honor system. Really a pretty site and close to a fast running stream where we filtered water for our morning coffee. 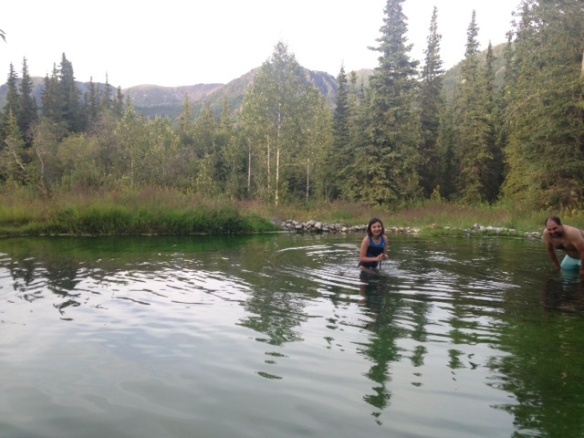 Atlin’s Warm Creek is partially fed by underground streams but is only a tad warmer than the average creek.