We took advantage of Open House Chicago by doing a quick exploration of Bronzeville.  Bronzeville spills east and west of Martin Luther King Drive from approximately 47th to 20th Street. 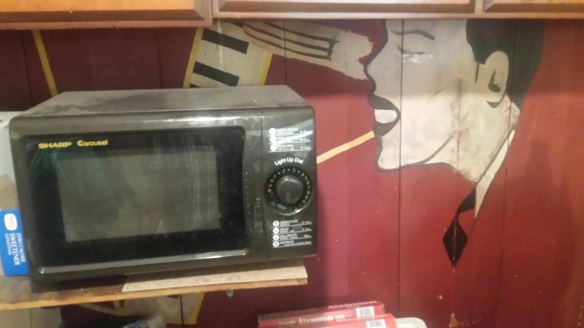 In the early 20th century Chicago was even more segregated than it is today (and that is truly saying something).  For thousands of African Americans journeying north for a better life, Bronzeville was one of the few welcoming places in Chicago.  And Chicago is a heck of lot better for their very impressive contributions such as gospel, jazz, and open heart surgery (by an African American cardiologist named Daniel Hale Williams in 1893).

Our all too brief tour of Bronzeville began at the Myers Ace Hardware (315 E. 35th Street).  From mechanic shop to swank night club (The Sunset Café) to an even swankier night club (The Golden Terrace) to an Ace Hardware store, this space has seen a lot.  And kind of like when we redid the basement in our 1920s house, a little peeling back reveals quite a lot of history.  In the case here it is a 1920s era mural that once decorated an incredibly small stage that featured musicians like Benny Goodman and Louis Armstrong (with our house it was mostly water stains and a few match books).

Next up was the elegantly decayed/hopefully someday restored Forum (328 E. 43rd Street) which at 115+ years old is likely the oldest surviving hardwood ball room in Chicago.  Outside the forum we met a woman whose former high school music teacher was featured on one of the large panels that gave a chronology of the music hall.  Inside the unheated place oozes the ghosts of debutantes, musicians, members of the Black Elks, and high school graduations.  Man it would be awesome to come back someday to see this place fully alive once more. 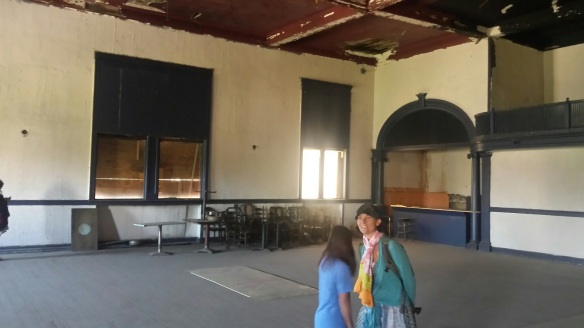 Our final stop was the Ebenezer Baptist Church (4501 S. Vincennes).  Built in 1899 as a Synagogue it was designed by Dankmar Adler to hold a glorious tune.  In 1921 the temple converted to its present church and a short while later it helped birth gospel music.   Smaller inside than the outside would suggest, this church practically glows with positive energy.  Maybe it was the Stars of David on the original stained glass windows, but I could not help but see this as a perfect blend of two beautiful cultures.  We left wishing to come back some day for the Sunday service.

And then we were gone, headed further south for Mor Mor’s potato sausage and another Bears loss.  We enjoyed one of the two.