Spoiler Alert: We made it home safe. On August 14th, after beginning our trip on June 24th, we arrived back at our home on the northwest side of Chicago. Before coming home we made a couple of stops that included meeting our new niece/ cousin (welcome to the world Willow, we love you already!) and hanging out with Mor Mor. So I know what you are thinking, did Noel get to 40 Cool Things? And did Corey really go on 40 hikes? Well, you are just going to have to keep checking in to find out.

For the next three cool spots, I direct you to Custer State Park. With over 30,000 acres of semi-wilderness, Custer State Park definitely resembles a National Park. It has the lakes, the mountains, and the micro weather systems (a tornado reportedly landed less than thirty miles away from us on our final, quiet and dry night in the park). But it’s actually a state park so you have things like “begging burros” and a bison herd that gets thinned out each fall. There are also no bears here so you can leave out your cooler which we found to be a refreshing change. For us though the star attraction has to be Mount Harney (Cool Stop #34).

Coming in at over 7,000 feet, Mount Harney is the highest mountain east of the Rockies and the first mountain Corey and I hiked up together. A couple of years ago Corey and Henna hung out at Sylvan Lake while I hiked solo up Little Devil’s Tower (which rises opposite Harney’s peak). Since then Corey has had a strong urge to come back and summit the peak (she also had a fond memory of a hot dog served up at the cafeteria which did not at all live up to her recollection). Well, despite some ping pong size hail on the way up, we made it to the top. And there, delicately perched like a nest, was the CCC built Fire Tower which offered a basement, killer views of the needle-like mountain, and an attic of sorts which required climbing up a ladder. The clouds cleared and we spent some time just hanging out and enjoying the view before heading down. And then, with about a mile and half to go before reaching our car, the heavens opened up and pelted us with a very persistent and painful hail. 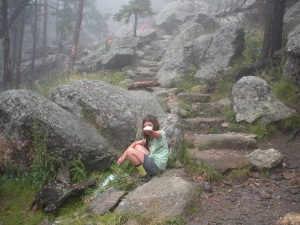 Cool Spot #35 is the Wildlife Loop. Along this eighteen mile road are the previously mentioned “begging burros” (which took visitors to Harney’s Peak up until the 1930 when the rides were discontinued and the burros left to fend for themselves), antelope, about 1,500 bison, nowhere near as many bighorn sheep, and a lot of mule and white tail deer. The whole ride is kind of like a fake safari ride only a lot cooler. Corey swears that bison are the ugliest, nastiest animals she has ever seen. Henna and I disagree and found the calves especially endearing. Our new bobble head bison agreed with us.

The other scenic highway worthy of being titled a cool spot is Iron Mountain Road (Cool Spot #36). First conceptualized by former South Dakota governor Peter Norbeck (who also is responsible for setting aside land for Custer State Park), this road links the state park with Mount Rushmore. A slow road, it twists like a pretzel and offers up a different view of the presidents at each turn. The many one lane bridges also force a sort of patient negotiation between the tourists whom are leaving and those who are coming to the Black Hills. We were among those leaving and, with the last of the mountains seen from our rear view mirror, we headed east on the interstate. Noel 8/15/13