I spent Memorial Weekend 2013 with something new, something familiar, and something strange. The strange was my introduction into gangster bluegrass music. More on that later. The new was our successful launching of the S.S. Blue Heron, an inflatable kayak big enough for three. And the familiar was the hanging out with friends on the eve of my big birthday (whose siblings guessed that I was turning 50).

I have known the Skokie Lagoon by bike since the trail extended to the Botanical Gardens sometime in my early teens. I remember riding with my family a little further north each weekend until we met gravel (and then the following weekend that gravel was paved and we were able to get a little bit closer to the gardens before hitting new gravel). Yesterday was my first time though seeing it all by boat.

We may have actually seen more blue herons than boaters. Each one would stand still like an awkward stick stuck in the mud before suddenly taking flight. It made naming our boat easy. We also made conversation with several fishermen casting from shore. All those good vibes and the pleasant water made it easy to forget we were just twenty minutes north of the city. 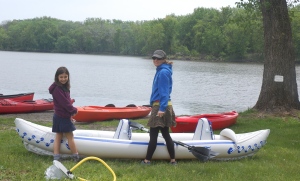 Memorial Day/ my birthday was overcast and gloomy. A perfect day to spend indoors but we spent it outside at a blue grass festival instead. At the City Winery in the west loop played three bands, Bubbly Creek, Whistle Pigs, and Gangstagrass. The first two bands were of the more conventional toe tapping yodeling type. Gangstagrass is the brain product of Rench and blends NY infused hip hop with traditional blue grass music. Their song “Long Hard Times to Come” is the theme song of FX’s Justify.

So there we were, my first day at forty, and children were dancing under an overcast sky, a friendly Ice Cube like performer rapping wild while his friends fiddled and yodeled behind him. It felt good to enter another decade. Noel