There is nothing like traveling to south Florida to make you feel young.   We spent the day and night in Venice and after a while here one starts to see everyone under the age of sixty as younger than they really are.  The fifty year old couple looks like they are in their mid-30s, tops.  The teenagers look like kids and the kids like babies.  And when you see a baby you think fetus.  I have to say that in this age phobic society we live in, it is very refreshing to see so many elders living their lives out in the open and in such a happy-go-lucky manner.  It is easy to make fun of, especially when the local paper out of Pine Island front page is focused on golf cart rules.  But here one sees the elderly out and about (yes on golf carts but also riding bikes with picnic lunches stored in baskets) doing everything from strolling hand in hand around town to doing yoga on the beach.  This model should be seen as a goal by everyone hoping to see a retirement.

At the beach just south of downtown Venice, Henna found many fossilized shark teeth.  She was not alone; a family near us on the beach found so many that they began to sort them by size.  Venice, by the way, is not only the shark tooth capital of the world, but also has a real nifty downtown that is both tasteful and touristy.  And you know seniors are not going to tolerate lousy restaurants.  We chose sushi and were quite happy.

Henna all business at beach

The last two days were spent traversing the various islands surrounding Sanibel Island.  Sanibel Island as a winter getaway is heaven.  It has all the charm of a northern Caribbean island (which it can almost be called) and the comfort of a U.S. state.  Between the plentiful bike trails, the almost unspoiled beaches, and the nature preserves there really is no reason to ever leave the island.  Except for in our case, we had to travel back and forth from our campsite on Pine Island. 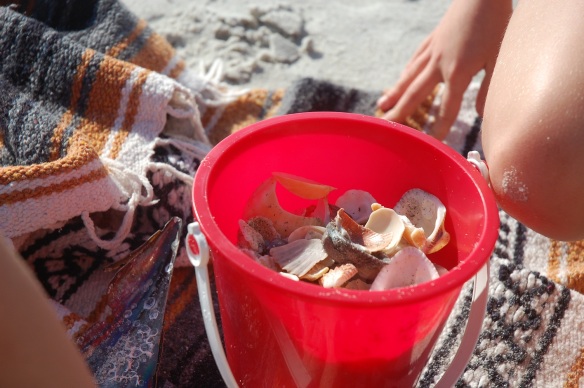 The Pine Island KOA, where we spent two nights, is part camp ground and part alternative senior housing with some residents living year round and others for a season.  The facilities and people were nice as well as the island itself.  The one negative is that there is no beach on the island.  No beach does have some benefits; one of which is the sleepy nature of the island.  Another is the cheapness of our campsite (about $27).  But we came for shells, sun, and sand meaning that we left our Pine Island home early each day in order to better commute to our vacation.  We made the best of everything and even made some yummy tacos at the nearest beach to us on Coral Island.  Oh, and we saw a gator on Sanibel Island.  It might be a bit hard for us to transition back to the Chicago winter.  Noel