Fort Robinson, Nebraska has been a mighty important staging point for the U.S. wars against the American Indian, a jail for some of those same Indians, a training ground for soldiers for the Spanish-American war, and a P.O.W. camp for German soldiers during WWII.  Now it is Nebraska’s largest state park and does a good job of showing off western Nebraska’s broken cattle country (that is how my National Geographic Book on state parks describes the landscapes, as well as presenting what life was like for the soldiers stationed here (I do wish they did a better job of discussing the treatment of the imprisoned American Indians as late as 1912 this fort was still sending out soldiers to put down “agitated” U.S. citizens i.e. American Indians).  We camped a few yards from route 20 which over here was little more than a country road.   We could have lodged in a variety of barracks including former officer quarters (and by midnight I wish we had).  The state park also has a small archaeological museum that includes a complete Columbian Mammoth skeleton that was uncovered in a “death embrace” with another mammoth.  And Summer Stock is here too.  We saw Godspell (which was a nice counter point to all the evolution facts we kept stumbling upon- I will still go with evolution but I have to say Godspell had better music). 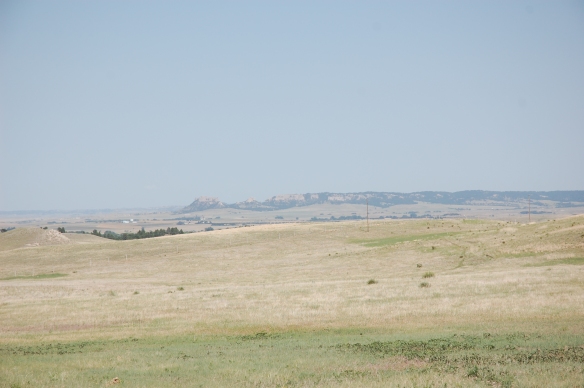 At 7 PM the three of us kicked back on Adirondack chairs and watched the blue sky.  It was in the mid 70s and beautiful.  By 8 (the time Godspell started) the sky was looking sinister and the temperature had dropped.  By intermission there had been some rain and there was not a visible star in the sky.  When the play ended the wind was gusting pretty strong, lightning was to the north, and the tent was not looking so good.  We drove into our campsite and stayed in the car to watch nature’s fireworks.  Wind was picking up and Henna kept nagging us to go into the tent.  All night the wind howled and a couple of times I sat up in mild (maybe moderate terror).  Henna slept soundly (and is still sleeping as I type this up).  Corey slept pretty well.  I nodded off around sunrise with the storm over and a little water at the creases of our tent.  Right now I am sipping coffee, writing (which I love), and sitting next to Corey (whom I love as well).  There are  sausages on the grill and the cool breeze feels good.  We leave Route 20 today to head south into Colorado.  Will update you all soon.

Note:  I am posting this now from the KOA in Cheyenne, WY.  Headed to RMNP today; we are all excited.  Having a lot of trouble posting photos.  Down the road we will post lots of photos.  Hope all is well with you.