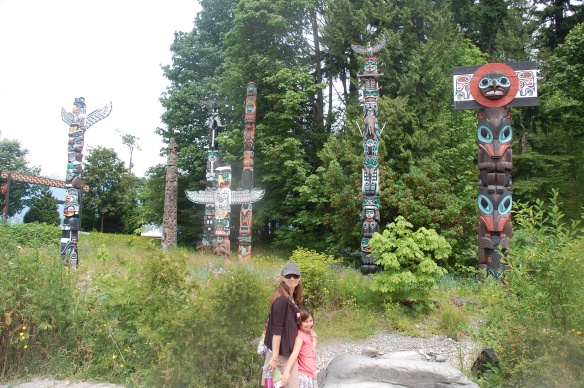 Our ride into Vancouver contrasted well with the majesty of Stanley Park.  After waking up in Surrey, B.C. we asked the teenagers at the Holiday Inn Express the best route into the city.  They suggested going west on Hastings Street.  This path into the city was gritty and bad ass and felt more Miami Vice than Northern Exposure.  After weeks of being in gentle and kind Canada, the shirtless man being hauled away by the police and the menacing youths looked all so … American.   As we got closer to the park the scenery changed into high end cafes, local coffee shops, and hipsters out for a stroll.  We stopped several times to ask directions (we hardly ever ask directions once due to Corey and I being incapable of processing more than a few sentences of any direction related paragraph spoken to us). 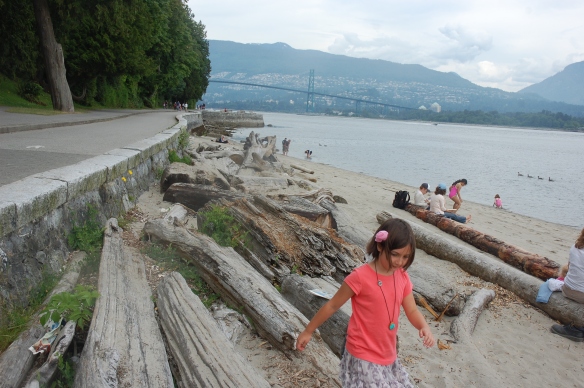 Stanley Park is beautiful and even more so when you realize that it is set in a world class city full of bustle and industry.  Within the sanctified air of dense evergreens it easy to forget the millions living nearby but out of sight.  But the park still has its quirks.  For one, the famed miniature train is set in an “Aboriginal Village” that charges you admission to enter.  That would be OK if the village offered genuine insight into aboriginal life, but apart from some dancing and story telling that felt more like preaching, the village mostly consisted of shops and overpriced coffee.  The train ride was cool, but this was another fee paid on top of what it cost to enter the village.  However, the ride featured an inspired Aboriginal story that incorporated costumed dancers acting out scenes as the train passed by and made me forget the $30+ (village fee and train) the short trip cost.

The park is hard to get a handle on the first time out and we did what most people do; drive from parking lot to parking lot.  Locals and smarter tourists than us whizzed by on bikes as we parked next to over packed tour busses.  We did do some light hiking in the Cathedral Forest (with me realizing that our family was both completely alone and within a few blocks of seedy Hastings Street).  We also admired cargo and cruise ships docked near a beach within the park.