First day out of Chicago and we found ourselves in Cincinnati.  This was our first time staying in Cincinnati and I was impressed by its’ distinct vibe.   We stayed at the beautiful Netherlands hotel which was built in the 1930 to be a “city within a city.”  Restored in the 1980s it is a definite upscale place. 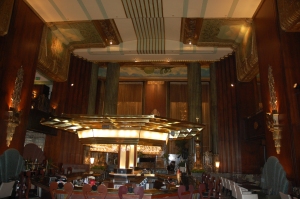 Mentioned in an earlier post, we were in Cincinnati for a wedding.  Dan, my first cousin, was marrying the super cool Liz.  The first place we went was the Wise Temple.   The Wise Temple is impressive.  Built around 1900, it is easily the most ornate temple I have ever seen.  Maybe it is my Midwestern upbringing, but most temples I know are built circa 1960.  This temple was so, so churchlike.  Stain glass windows, pews, cathedral ceilings; for someone like myself, a secular Jew who loves churches, it was almost a religious experience.  Almost.  As the wedding party practiced walking  Corey and I chilled in a pew.  Later we had an awesome dinner at this cool Scottish themed pub (the waiters had to wear kilts).  It was fun to be somewhere away from home and eating with my parents, brother and sister in-law,  niece, aunts and uncles.  Dan was nice enough to invite me and my brother back to his place to have some drinks with his friends.  We talked dued stuff until the wee hours (about 11:30 P.M.)  Came back to the hotel to an awake Henna and an almost sleeping Corey.  I promise to post pictures of the temple and the wedding soon.