Portland’s parks as a whole deserve an entry in our Hennacornoeli listing of the Great City Parks.  Like everything out west, Portland’s park system is larger than their eastern counterparts.  A real challenge to us then is picking which park to profile.  Forest Park, per Wikipedia, is the largest “wilderness” urban park, (it may be a little wild, but when I think wilderness I imagine a place miles from people and a road system), Mills Park is the smallest park in the U.S. (at 2 square feet it makes for lousy tag), and Mount Tabor with its very dramatic views would all be good picks.  We, however, chose Washington Park as being most worthy of the Hennacornoeli Great City Park award.  Maybe we will send the park a statue.

Things to do in Washington Park:  visit the Children’s Museum (a truly great playhouse for children of all ages to explore), go to the zoo (we did not but I am sure it is a fun time), smell the roses at the International Rose Test Garden, sit for a concert on the terraced steps immediately below the rose garden, contemplate the destructive nature of war at the Oregon Vietnam’s War Memorial (we found the layout, an extended and windy walking path leading past a time line of the war, powerful and engaging) or take in the trees at the Hoyt Arboretum.  Although the park itself is away from the urban center, there is great public transportation available to whisk you both to and away from the park.  The park even has a large and affordable parking lot making it a great base camp for further city explorations.  And like all great parks, the boundaries are a bit muddled and seem to spill into the bordering neighborhood. 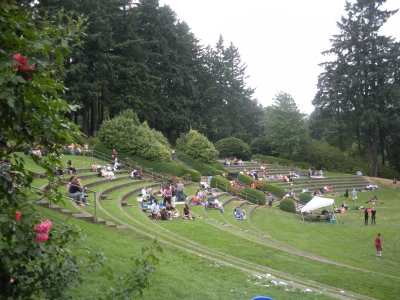 As for the city itself, many people think of Portland as a smaller San Francisco.  We see the city more like San Francisco’s somewhat scruffier but more endearing younger cousin.  Like San Francisco, Portland has a lot of rain, a green feel, and a sophisticated urban feel.  But both the wealth and poverty in Portland is less pervasive than in the bigger city.  Whereas eating out in San Francisco can be quite pricey, we ate well and relatively cheap at smaller sushi places, coffee shops, and one food truck that served up mighty tasty crepes.  The homeless in Portland also have a quaint, just doing this for a lark feel in contrast to the more professional San Francisco pan handlers.  Corey and I were amused by all the youths with smart phones, a hip dog (usually with a bandana), and an extended hand asking for money (probably to help pay for their data plan).

Although we really loved being in Portland, I just felt that Portlanders did not always get me.  For example, while picking up a bottle of wine I said something like “Man, you guys have it good here.  I just miss pumping my own gas” which was met with a dirty look and a sarcastic “yeah, that must really suck.”  Other residents told deeply personal stories such as the young man on the MAX who told of his recent struggles with a heroine addiction.  He also told us about his plans to fight forest fires in Montana (good money) and how he dreaded the resulting separation from his young daughter.  Still other residents, with little encouragement needed, talked about the need to further legalize pot, how much they disliked Chicago, and the virtues of Portland.  Hopefully some time soon we will be able to get back to Portland.  I will refrain from talking about the joys of pumping your own gas and will be ready to counsel all who need counseling.