Hiking to the Granite Chalet (GNP)

Ryan, a large, tatted up man, flew to Seattle to bike home to Rochester, New York. We met him shirtless and laying on a boat dock, a cold drink by his side. As Henna was about to cannonball into Lake McDonald, I asked her not to splash anyone. Ryan said not to worry, he had just come out of the water and besides, it’s a public place.

Got to talking to Ryan and he told me about his bike ride and his double majors. Ryan also said, at the risk of sounding too much like a hippie (and to that I replied, if you cannot sound like a hippie while biking across America, when can you?), that we all need to shut off our televisions and just talk more to one another. He also mentioned how absolutely kind people were to him, how strangers often invite him to camp in their back yard and then cook him up a meal. Ryan scoffs at the idea of carrying a gun or some other type of protection. He says people are good. And they are. Mostly.

While we were having this nice conversation, a few miles away two friends were mountain biking in the surrounding national forest. Brad Treat, a law enforcement officer with the U.S. Forest Service, apparently startled a grizzly and was pulled off his bike and killed. This was only the eleventh person ever killed by a bear in Glacier National Park. You are much safer backpacking here than you are visiting Chicago.

But bears do sometimes attack and some people are bad. To paraphrase the Park Service, our safety is never guaranteed. Yet we think it is worth it, to leave your house, to meet strangers, to hike amongst bears and other wild animals, to cross swinging bridges, and to hike miles from your car into a place where snow never completely melts and the world is still wild.

The Swinging Bridge at Kootenai Falls (a little west of Libby, MT on HWY 2) 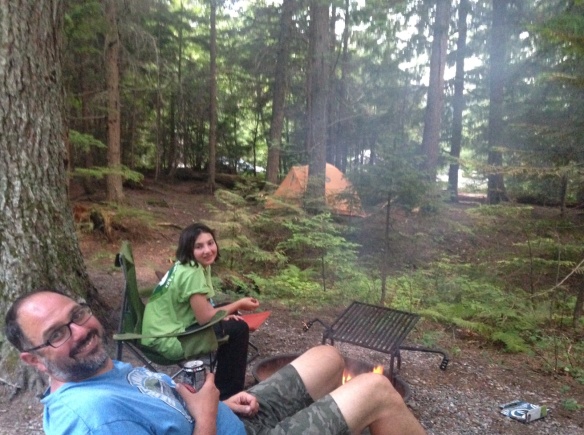