Crossing over the Mississippi into Cape Girardeau we smiled at the big sign greeting us; “Cape Girardeau, hometown of the big mouth idiot Rush Limbaugh.”  Actually I just made that up.  There was no sign that I could see, but the visitor’s guide did indicate that one could take a self-guided trip past the hospital he was born in as well as other markers to that dopey bigot.

For the same reason why I wanted to fall in love with Mark Twain’s hometown of Hannibal, MO, I wanted to find serious fault with Cape Girardeau.  Ironically, it was Hannibal that felt worn out and offered to us only the most narrow of glimpses into its past.  Cape Girardeau, in contrast, had a friendly and comfortable feel.  Like many river towns, it was built on steep bluffs and seemed to rise up over itself with an elevated courthouse standing guard over the city.  The historic waterfront possessed a good number of 19th century buildings and just enough bars to remind everyone that Cape Girardeau is the home of Southeastern Missouri State University.  And lest you forget that Cape Girardeau is a river town, the waterfront is protected by a sturdy floodwall that tells, through colorful murals, of the interplay between river and town over the last three hundred years. 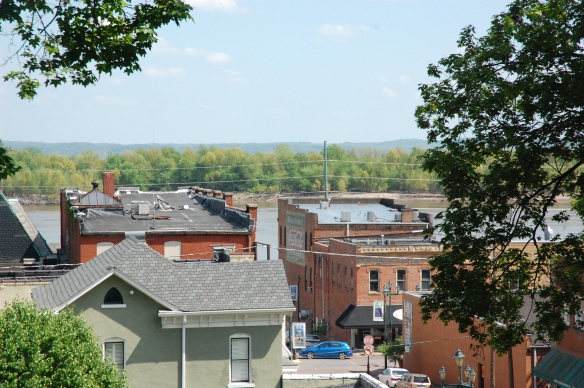 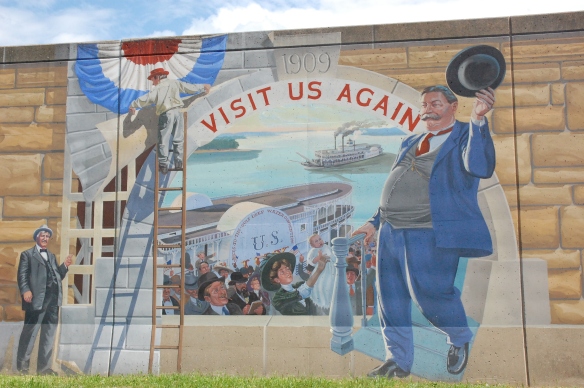