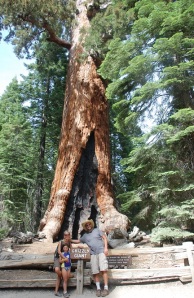 Following our own path.  On our last full day in Yosemite, we awoke without any real plan….should we head back to the valley to view the amazing always talked about Yosemite falls while battling heat and crowds?  Well, we opted for hiking in the high sierra’s, which I’m glad we did. We took advice from our trusted and favorite ranger, Jeff and walked to May Lake.  This hike took us back east on the road we came in to the park, then two miles on a rough road into the wilderness just to pick up the hike.  Awesome.  The road was desolate and we thought a bear was going to jump out at any moment…which one never did.  But as we came upon the trail head to our hike, we were met with a group of cars…..we guessed that this hike was not a well kept secret.  This did not matter, the hike followed for over one mile over granite rock leading into a beautiful meadow lake…lovely.  This lake hosts many backpacker tents and the high mountain sierra mountain club tents…we talked to the guy working the sierra club tent and he recommended continuing the hike up mount Hoffman to the spot in which john Muir himself was quoted as saying, “It’s at this spot that I tend to linger than any other point”.  This was enough to make us continue, and I’m glad we did.  The hike that followed was such a highlight, it wound up and around, through meadows and marshy land, and then up switch back after switch back of scrabble rock, in which one step forward often resulted in two steps back.  But what an amazing view when you stopped the push forward and turned around at the view of the mountains and of half dome in the distance….it was breathtaking.  Henna and I stopped right before the top of the mountain and let Noel continue on so he saw the top, some snow, and the valley behind Mt. Hoffman.  In my later years, being that high on a mountain can sometimes give me vertigo and Henna  and I were content to wait Noel’s return.  We were happy watching marmots play atop their high sierra abode.  We came down tired and happy with our dinner back at our campsite.  We chatted with our wonderful neighbors who gave us four of their fresh chicken eggs…that made the most yummy scrambled eggs ever, went on  nature hike with Jeff, then returned to an uneventful bear night.

We awoke early today, packed up our camp and heading into the valley to say goodbye and to search for the beauty that our ranger told us bout…….we somehow missed it our first go round.  We had breakfast at a semi deserted beach and swam for a bit.  We ran into friend from the beginning of our trip who is staying at the park doing research.  Ellen is her name and she is from Crystal Lake.  We chatted for a bit, and then we were off….we found more water holes to swim in, lovely meadows and we made peace with the valley, although the temperature was teetering on one hundred.

We left the park, through the famous tunnel view, and made a stop at Mariposa Grove to see a magnificent fifteen year old sequoia…..we were hot and the hybrid shuttle bus entailed long lines…but we found ourselves at a not so nice KOA off 41. Henna and I talked about how not everything can work out perfectly on a trip, that there always is a low point.   The pool was crowded, we have not figured out what lives in the two inch holes the inhabit the ground….but the food was yummy, the stars are bright and we have kept the rain flap off for tonight, yep that’s following our own path. 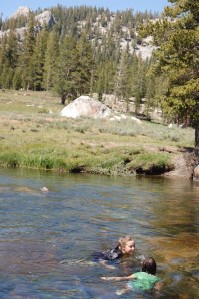 Well we lived through the night.  We raced into the park, breezed through the Meadows in order to get to the campground we wanted only to find it almost completely empty.  And that was the first Yosemite myth debunked; you do not need reservations in order to camp in the park.  After setting up camp we returned to Tuolumne Meadows for a short hike and then swim in Soda Creek.  Later we tasted the spring bubbling out of the nearby rocks.  Conversations with rangers at the Meadow indicated that the serious bear problems are in the valley and not in the high country where we were camping (this was not exactly the truth). 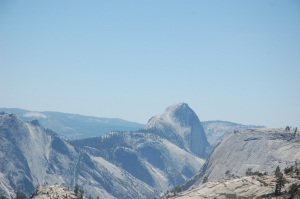 Once back in the campground Henna and I visited new friends we had made earlier while borrowing a pencil.  Turns out they had relatives with them visiting from Scotland (quick jolt of homesickness).  The young boy from Scotland excitedly told us about the bear he saw not 20 feet from his campsite.  Later while Corey is making dinner we see a young pair of rangers (they always seem to be paired up male to female and in there mid 20s; it is like some odd dating game show) walking briskly past.  A large crowd gathered about ten sites past me and I hear someone say there was a bear in the campground.  The same rangers walked past me again, but this time he had a rifle which he then used to shot rubber pellets into the bear’s behind in order to scare him off.  The campground hosts walked by later (a middle aged couple with a vaguely NY accent, they easily could be friends with my parents) and told us to expect several e bears to walk in and out of our campsite for the rest of the night looking for food, trying to borrow money, and having some fun with us. 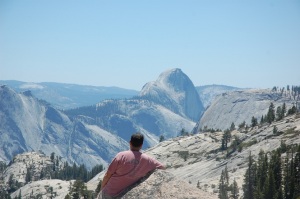 For some reason this distressed Corey.  Me, I was a little concerned but, unlike in Griz Country, the rangers repeatedly told us to scare off any bears we encounter.  My favorite sign suggested we throw a pebble at the bear so that we frighten but not hurt the bear.  At the campfire program the rangers told us a funny story about a nine year old girl standing on a picnic table by herself and stamping her feet in order to ward off a bear eating her food.  You get the sense here that the bears are little more than overgrown raccoons (who are distant cousins of bears) and not man eating beasts.  At least that is what I kept telling myself.  Anyways, several of our neighbors here were loud and stayed up past 2.  Normally this would have annoyed us, but we welcomed what we saw as anti-bear noises.  Henna by the way was 100% aware of our concerns, retired early to bed, and slept like a rock.  Ah, youthful innocence. 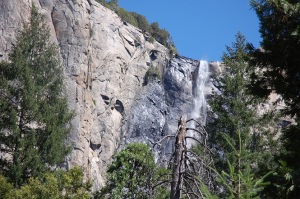 Two nights down and the bears have not bothered us yet.  Last night had a much happier vibe to it.  After calling my mom and scaring her about the bears (“Get out now!  Just find a motel or something and leave!  Promise me you will do that!”) we returned to our campground after a fun day exploring the park.  Quick impression:  Yosemite has it all.  You want Sequoia groves?  They got it in bunches. A highlight of the day was definitely our stroll through Tuolumne Grove (reached by a short one mile walk).   High mountain country where you need a good jacket at night?  It dropped to the low 40s last night.  A warm valley with majestic and unbelievable rock formations as well as rivers meant to swim in?  Well, that is what the park is known for as El Capitan and Half Dome are as pretty as you think they are.  Also, head to the Merced River and pull out by the side of the road and jump in.  And crowds too!  The Valley is like a park within the park; the kind of park that every person in your town feels the need to go to at one time.  With trails of asphalt and bikes whizzing past your ear you can, if you are lucky enough to get a parking spot, stroll the Village for ice cream and Ansel Adams prints at the “gallery” (and by gallery they mean print shop). 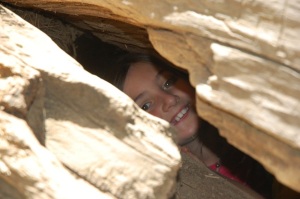 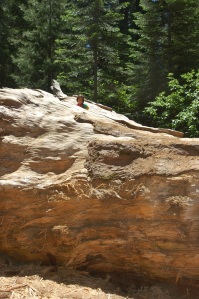 My understanding is that before the cavalry came and kicked out the people that had lived in the Yosemite area for thousands of years, there were two tribes; one in the valley and one in the high mountains.  They did not always get along.  This is still kind of true.  People in the high country tend to look down, figuratively and literally, at the folks in the valley.  Down below they live it up in comfort and up above they take pride in their rustic habits.  Personally, I like both areas.  The valley is stunning in beauty but crowded.  It would be a shame to visit the park and exclude either area. 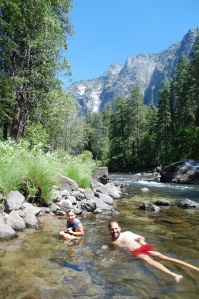 Back at the campground we met a cool ranger.  Jeff is about 30, has a political degree from Berkley, and served in the army.  When not working as a ranger at Yosemite (it is a 6 month gig) he often spends the time backpacking over the world.  He is proud to say he has visited 43 countries and has a preference for the un-Starbucked lands of Central America and the Balkans.  He hitchhikes, takes busses, and works odd jobs in order to pursue his passion.  All this traveling has given him some disdain for the borders of the worlds and he made for a very interesting conversation.  Jeff also is an awesome ranger who lives and breathes Yosemite Park.  We had questions and he had answers.

About those bears.  The campground we are staying at is easily more than 95% tents.  Many of our neighbors are, as Jeff calls them, “repeat offenders.”  All the repeat offenders have bear stories (my one neighbor was alone and up late at night when a bear strolled a few feet from him).  But they keep coming back.  And the rangers everywhere treat the bears by first breaking into a dead run in their direction.  If that doesn’t work it’s time for the rubber pellets.  The first night Corey and I did not sleep well.  Last night we did.  Just remember, if you are in Yosemite watch your strong smelling objects, do not feed any wildlife, and never lend a bear money (he will just spend it on food).  Also never pick up a hitchhiking bear.