Henna begins the hike up Monks Mound in Cahokia Mounds (just north of St. Louis on Interstate 55). The Cahokia settlement was a pre-Columbian city estimated, in the 13th century, to be larger than then London. As of 2017, admission is free.

It’s raining south of Kansas City. Yesterday, not too far from here, we met a couple outside a gas station. They saw our plates and wanted to talk about the Cubs. He, a friendly fellow dressed in overalls, told us several stories about him and his relatives catching the Cubs nearly a decade ago when they played the Royals in inter-league play. His pick up truck had a Cubs border around the license plate. And he also has a signed Ron Santo rookie card. Nice people. 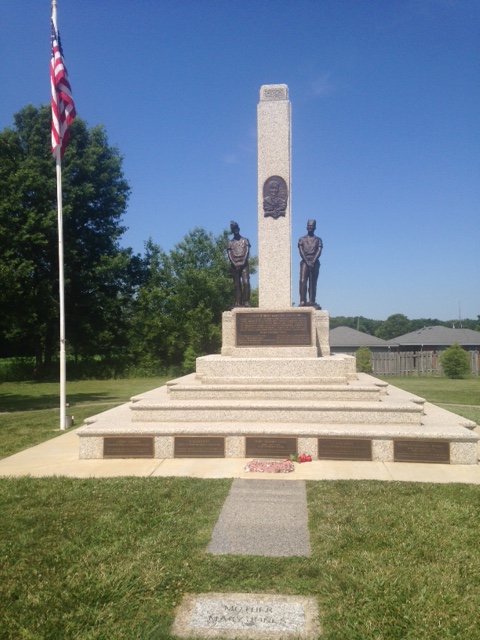 Born outside Cork, Ireland in 1837, Marry Harris “Mother” Jones endured the Civil War, the Chicago Fire, and the death of her husband and four children to yellow fever. A champion of miner rights she was once called the “most dangerous woman in America.” She died in 1930 and was buried along side many of the victims of a late 19th century labor strike/massacre.

Near the end of our conversation, with dark clouds forming above, a crazy looking man with a Scooby Doo inflection in his voice (like the cranky caretaker when he pretends to be a ghost) asked us which way the clouds were heading. The man then kind of chortled when I said had no idea and then, kind of like a prophecy, he warned the fourth may be ruined. I guess maybe he was right.

I have to admit I was a little skeptical when Corey first broached her “no plan” idea for this summer. But yesterday, with no commitments in our future, we stopped several times at places we might have otherwise driven by. And thank you Tom, the Bird Man of Edison Park, for recommending we check out the Mother Jones Monument and Cahokia Mounds. The latter was truly awesome and should be considered on par to Mesa Verde.

What to do when your local high school closes? How about repurposing the building as one giant, permanent flea market. That’s what they did in Livingston, Illinois and it makes for a pretty cool stop.

The rain here does not seem willing to move on. But we are. Will catch you up when we get there (wherever that may be).