From Galveston we drove to San Antonio where I was lucky enough to be able to write a review for Splash Magazines. This entailed us staying at a luxury hotel and dining at a very hip restaurant. So dedicated where we to the story that we even had breakfast in bed. Almost as much fun as camping. 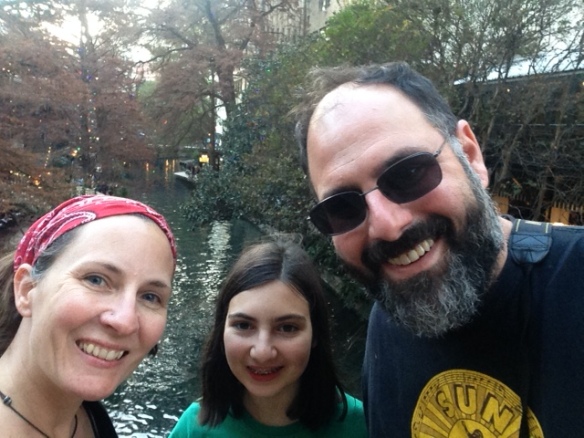 Along the San Antonio River Walk

We also made time to check out the River Walk which is located one story below street level like some sort of subterranean mirror image of the above downtown. At night it is lit up with Christmas lights and people crowd the cafes to sip coffee or cocktails. Strolling along the river bank it was easy to think we were in Europe. Then we walked into a gift shop that sold toilet paper with the President’s image on it and we knew exactly where we were.

Street art in Austin. Works for us.

Next day we drove to Austin where we saw a pickup truck with a bumper sticker that read “Not my President.” We were confused about the owner’s politics (sticker could have referenced either the current or future President). Other stickers, like one for the Human Rights Campaign and several for Hillary, were less confusing. Digging the progressive vibe we checked out the shops on South Congress Street. Later we went to the Texas Capitol and were greeted by the Confederate Soldiers Monument which celebrates the Texans who “died for state rights guaranteed under the constitution.” This is followed by a lot of propaganda on how the brutal north suppressed the noble southern wish for sovereignty. There is no mention anywhere about slavery. Must have been an oversight.

Wanting to fit in we sponsored a bill limiting a woman’s access to birth control.

Politics aside, the capitol is impressive and the people working there, as is true with almost everyone we met in Texas, are friendly. One attraction that caught my eye was an exhibit celebrating the fifty-two African Americans who served in the Texas legislature immediately following the Civil War. After Reconstruction, however, it took until 1966 before an African American was elected to the Texas Senate. No reason is given for this extended absence, but my guess are the usual culprits of ignorance and racism. That and a healthy dose of voter suppression. Something to consider as states across the country are currently attempting to limit early voting and enact stringent voter identification laws.

Deep in the heart of Texas exists the amazing Buc-ee travel marts. Like Wall Drug only without the robotic dinosaurs.

After Austin we headed north to the Sixth Floor Museum at Dealey Plaza in Dallas. Housed in a former book depository (yes, that book depository), the exhibits first focus on the Kennedy presidency before delving into his assassination. It is very tastefully done and left us with many “what ifs?” like “what if his motorcade sped up as it approached the expressway?” Leaving Dallas we continued to think deep thoughts and I thought of how big our country really is. Sometimes I think that the amazing thing is not that Americans are so divided but that we ever come together at all. But then a national tragedy occurs and suddenly people feel a kinship to people who vote and think differently than ourselves. What if more people were able to drive instead of fly across America? What if that led to more open conversations? What if indeed. 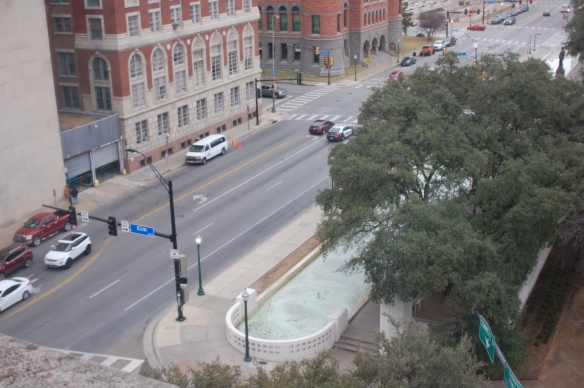 Looking down at Dealey Plaza from book depository

1 thought on “Talking Politics in Texas”