From the late 1880s through the early 20th century, the sleepy town of Baraboo became a whole lot more interesting in the winter. This was when the Ringling brothers took the circus (elephants, side show attractions, and a lot of sequins) back home to rest up for the next season. After the circus combined with Barnum and Bailey they moved out of Wisconsin and left behind a bunch of buildings including those used to house elephants, ponies, and costumes. In 1959, it was opened to the public as a museum and is now a sprawling complex with the pretty Baraboo River bisecting the grounds. In addition to the tasteful displays that document life in the circus, the place also offers a crazy large collection of Circus Wagons which are packed tight in an airplane-like hanger with refreshingly little related information provided. You just squeeze in between the painted wood and gape at the incredibly detailed depictions of the natural and unnatural wonders of the earth. Being fall, we had the place to ourselves and it was not hard at all to imagine excitement these wagon would create when rolling into some sleepy mid-western town.

Most interesting cocktail party ever

What we did not see where a lot of people at the museum. I guess this is a constant problem with one bored employee stating that the place was always in danger of going broke. Even with the daily magic shows and animal attractions (we missed the former and the later was done for the season), the museum has trouble competing with all the waterparks and wax museums (all much closer to the pricey Dells resorts than Baraboo which is a good thirty minute drive away). But I am not worried for their future at all ’cause there will always be a place for the Greatest Show on Earth. 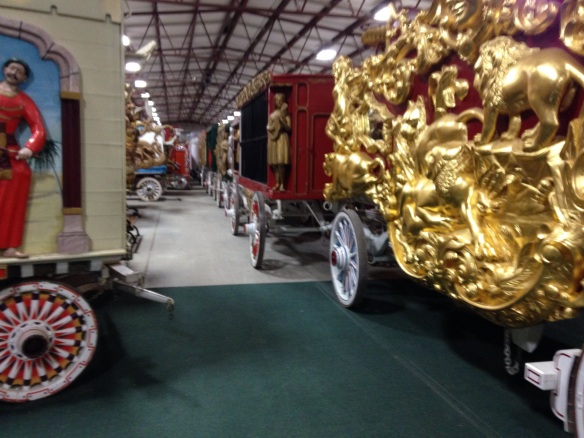