It seems just yesterday that we started our little blog. Ah, the summer of 2011; President Obama was in the White House, gas was kind of expensive, and we were about to embark on another epic road trip. We decided to name the blog after our favorite family holiday (Hennacornoelidays, which was known as Cornoelidays prior to 2003) and were inspired in no little part by This aMACEing Life which chronicled another traveling family. Their blog, authored by makeup artist Christina Tracy, detailed the hours spent traveling with husband Mitch, baby, and the powerhouse musical Wicked. They were “fresh pressed” and we, along with hundreds of other people, liked and commented on their site. Stina (as she is known by her fellow artists who make Wicked possible) liked us back and a cyberspace friendship was born. Mace now is a super smart and adorable two and a half year old and we hung out with him and his parents a few days ago for pizza. Mitch talked about how it is time for social media to go the next step and actually connect people in the flesh. We think that would be nice. Stina and Mitch were also gracious to invite us to watch them at work and we took them up on the offer. 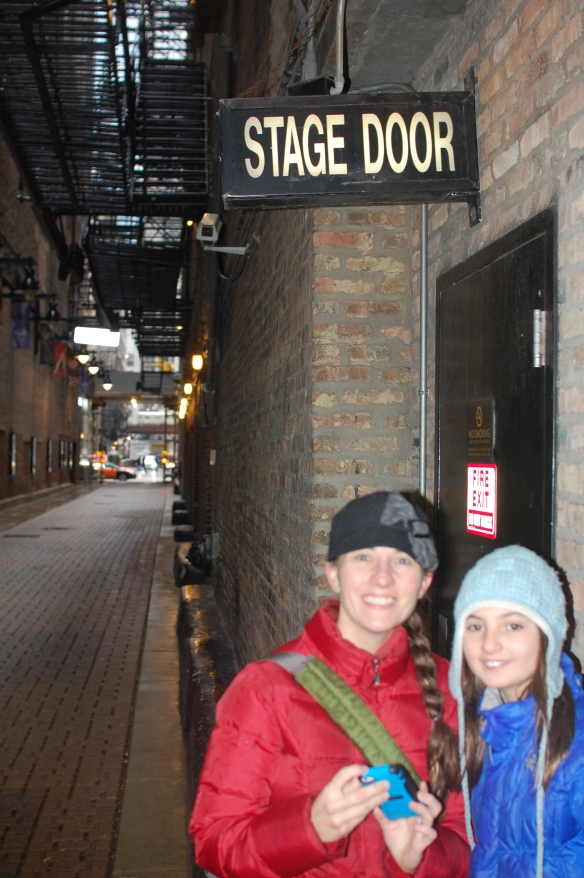 Hanging out at the Stage Door

Here is something you might not know about Wicked. Pretty much everything you see on stage is transported from city to city (even the floor belongs to the company). It takes 19 diesel trucks to make the move. About 70 people travel with the show. This includes three families with kids. Stina and Mitch both work long hours (besides putting on approximately eight shows a week they also attend rehearsals) which means that they are always looking for a new nanny. The beginning and the end in a new town are the worst for Mace as all his toys have to be packed away (along with pots, pans, and other home essentials) before leaving and then do not arrive to Mitch and Stina until a few days after they have settled into new digs. Wicked is not rock and roll. The tour (and them) settle down for a month or two before pulling up stakes. Sometimes they win (like when they played Honolulu for a spell) and sometimes I think maybe they would rather be somewhere else (Appleton, Wisconsin in winter does not sound fun). 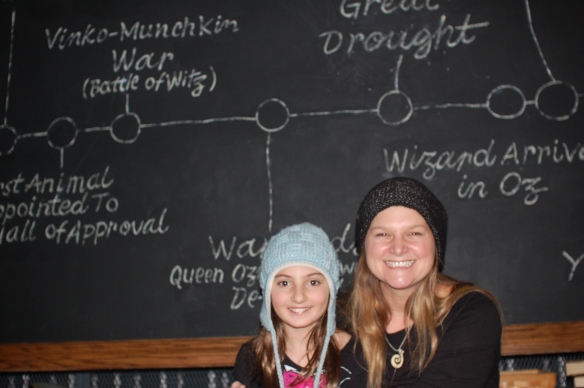 Stina and Henna in front of Dr. Dillamond’s lesson plan

So on Hennacornoeliday (and yes, Pochachane did play his yearly trick on Henna the night before) we found ourselves undeterred by a freezing drizzle and a flat tire suffered a few blocks from our house. Going old school (we drove the blue truck) we made it downtown just in time to get our tickets and meet Stina at the Stage Door. The belly of the Oriental Theater is a cold subterranean maze which snakes around a series of small dressing rooms and common areas. People everywhere were calmly preparing for their roles (both on and back stage) in between general holiday inquiries and light conversations. The amazingly talented Alison Luff (Elphaba) talked camping and answered our questions while Stina made her green. Stina not only has to make her green, she has to make sure that everyone Alison touches on stage does not also turn green. Plus there is the sweat factor. Stina said that new ensemble members sweat a lot the first week on tour, then not so much afterwards. Sounds like a life lesson to me. Almost as impressive as her deft transformation of normal skin toned Alison into a green creature was her later quick work (under two minutes) changing Boq into the Tin Man.

Henna backstage with the Wizard

Corey and Henna watched the show way up close. I sat in a small carved out space a few feet from Mitch who worked an impressive looking sound board (he estimates that it is worth about $500,000). The area where I was consisted of about six chairs and a folding table. Sitting next to me was actress Dina Bennett (Midwife, ensemble member, and u/s to Madame Morrible) who was taking the day off. Every once in awhile she leaned over and whispered something clever to me. In a production full of nice, down to earth people, Dina still stood out for being both.

Stina and Mitch (with Glinda’s dress in background)

After the show Mitch explained a little about what he did and this is how I understand it; everything on stage that makes noise (every instrument in the pit, every actor on stage) has a microphone. Mitch turns those microphones on and (just as importantly) turns them off when not in use. So when Glinda and Elhaba speak to each other Mitch is rapidly turning on and off microphones just in the nick of time. He messes up and you won’t hear what they have to say.

Meeting Stina, Mitch, and Mace along with Alisson Luff and Dinna Bennett was aMACEing. It takes a lot of artists to make vision come together and catching a glimpse of them at work was inspirational. I am lucky to work with a lot of incredibly talented teachers, social workers, physical, and occupational therapists. Like Stina and Mitch they make it look easy. I know the truth. It takes a lot of work to be an artist. Noel 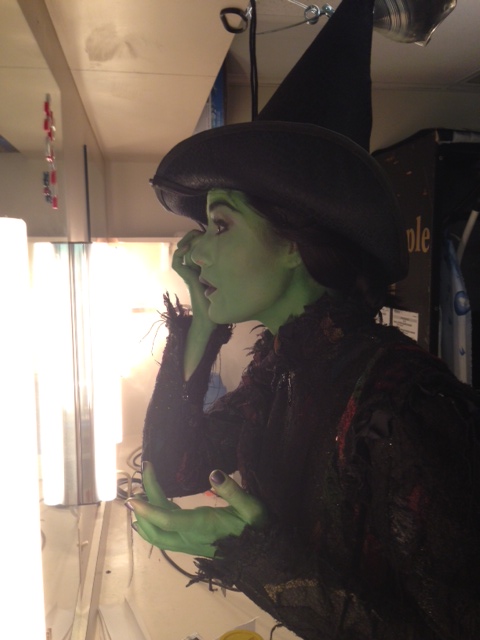 Special thanks to Christina, Mitch and Mace along with Alison Luff for welcoming us into her dressing room. We are truly grateful. 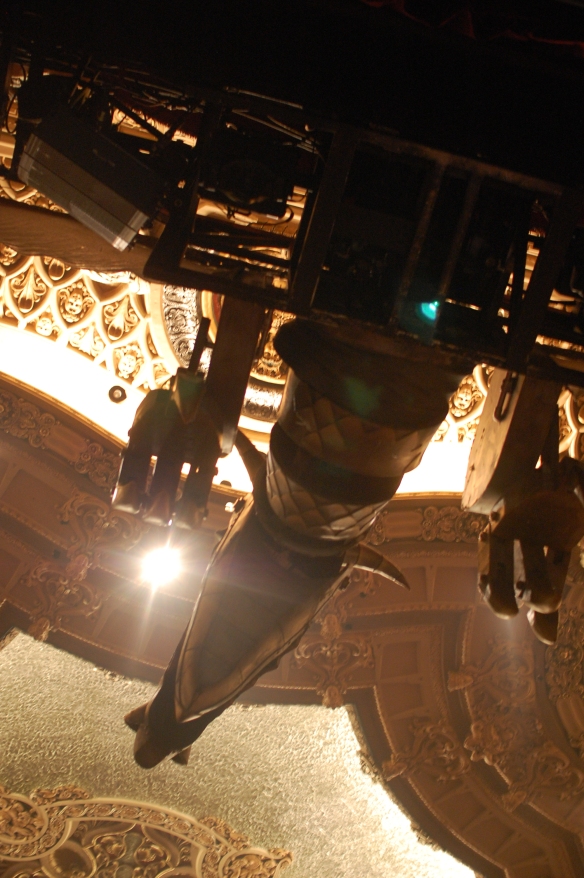 2 thoughts on “Our Backstage Pass”