Been to this peaceful and fun park now four times but yesterday was the first time I ever really considered the people who lived here for close to ten thousand years before Waterton was a park. By the way, in writing this I realize that I am starting to run out of adjectives to describe what I am seeing so please bare with me. And speaking of bears, we saw a couple yesterday. First time was across the road from the Lost Creek picnic area that not only has a wood burning stove, but also a nifty grill within the stove that was perfect for grilling up my smokies (or sausages at they are called in the States).

Anyways, we were munching on our lunch when Crazy Bear Lady (who claims she saw seventeen bears the day before) started yelling and gathering her camera and children. It seems that a couple of bears were also enjoying their lunch, or they were anyways until Crazy Bear Lady called attention to them which resulted in a traffic jam which probably ruined their day. Later we were on a very informative and interesting guided hike (again, running out of adjectives here) and, just as we were rounding the final ridge, a rather large bear walked maybe twenty five yards in front of us. We quickly turned around and walked back before remembering that our car was actually forward. A few minutes passed before others in our hiking party caught up with us. They did not understand our apprehension so we let them lead the way back to the car. 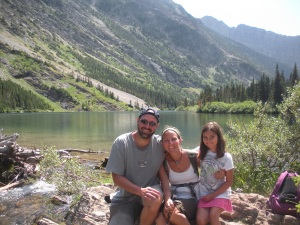 One of our favorite mountain lakes- Bertha Lake

But what made yesterday really special (besides not being eaten by a bear) was our immersion in the pre-historic world of the Blackfeet people. First it was with the arts and crafts activity at the Crandel Moutain Campground that was led by a couple of ladies who nicely represented the Blackfeet Nation. In between making a traditional head dress out of safety pins and beads, they patiently answered my endless questions about the history of the Blackfeet people.

Afterward it was a guided hike led by a naturalist who again patiently answered my endless questions about the Blackfeet people. The theme of the hike was how the Blackfeet people hunted the bison (pronounced with a z sound in these parts and nicknamed “walking Walmarts” by the other facilitators). The answer involves fire, buffalo pounds (which are natural boggy traps like snow drifts), and “dead men” which were rocks stacked up to resemble people which kept the bison moving in the direction they wanted them to. We also talked about some basic rites of passages like vision quests. Soon many of my friends and family are going to fast for a day. Black feet adolescent males did it for four days. They also did it alone on top of a mountain. Afterwards they talked about their visions to their elders (and probably did not even have any mandel bread to break the fast).

All in all it was a good day and our third one in the park. That night it poured on us and this morning we packed up in the rain. But on the way out we enjoyed an awesome breakfast at the Waterton Lakes Opera House (Cool Stop #27). When we first entered the park I was kind of disappointed that the movie theater was gone. It was after all where Corey and I saw Planet of The Apes (with Mark Wahlberg not Charleston Heston- we are not that old). But it has been converted into a very cool coffee house/diner/ music venue/ice-cream store. We went there almost every day and greatly enjoyed the Sirius music (mostly Outlaw Country) and the good restorative job done by the owner, Phil. This morning I talked a bit to Phil and was happy to learn he has spent almost every summer in the park and always enjoyed seeing movies at the old theater. We are certain he will continue to take good care of the former opera house. A special shout out to our new friend Lona (sorry if I spelled your name wrong, please correct me if I did) whose day job is a bit more stressful than most. Lona entertained us greatly with stories that could only be from Alaska (respect all bears but really respect the polar bear). We loved camping next to you and hope to hear from you soon. Noel 8/3/13