And I am not talking about some bar in Lincoln Park. This hot spot is pretty darn hot. Like coming from the molten core of the earth hot. I am referring to, of course, the caldera better known as Yellowstone National Park. Old Faithful, crazy traffic stopped to look at some bison sleeping by the side of the road, and a million or so visitors that hardly ever bother to leave pavement; all of this is made possible by a hot spot trapped deep in the crust of the earth.

Here’s something I bet you did not know about the hot spot. It’s on the move. 11 million years ago it was a few hundred miles west of where it is now. That is about the time it exploded and caused a bunch of prehistoric rhinos, camels, and horses to choke to death on the ash in north west Nebraska (see Ashfall Fossil Fields). I figure in about a billion years it will be under Chicago. I also figure the Cubs will still not have won a world series. Maybe they will have a 13-0 lead in game 7 of the World Series with one out to go and then…boom, super volcano and no one bothers continuing the game.

Nope, they didn’t catch anything

In case you are wondering it has not been all geo-thermal hotspots here. We also had a pleasant drive through the Ruby Valley (between West Yellowstone and Missoula, MT where I am typing this), made a few new friends (hello Carlee and Carrie, sorry if I misspelled either of your names), and ended up having coffee with the backpackers we met on the way to Lake Solitude (the ones who recently quit their jobs). We also managed to score Cub tickets from two cool guys camping next to us and then forwarded them on to our house sitter. To all our family and friends, have a happy 4th of July! Noel 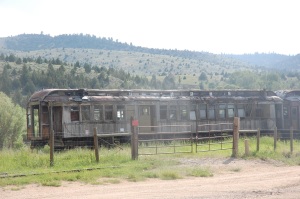 At one point Henna made 4 baskets in a row! 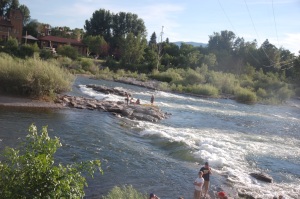 In Missoula on the 4th of July