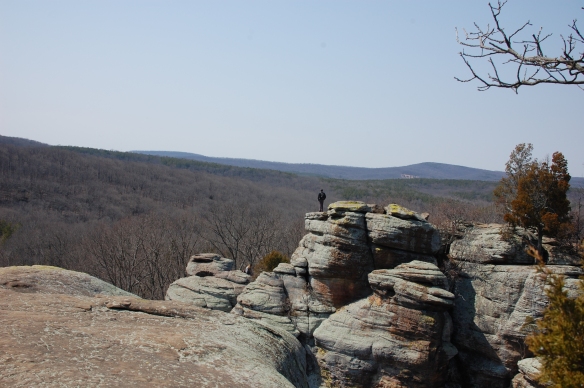 At the cliff’s edge

Garden of the Gods is a relatively well known place but still involves a whole bunch of narrow winding roads with only limited signage pointing you in the correct direction. The roads are all paved though which puts it ahead of most S. Illinois attractions. 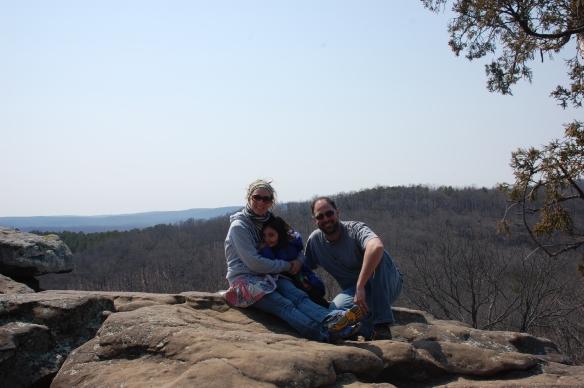 Hanging out at the Garden

How the Garden came to be involves millions of years of erosion and a big inland sea that covered much of North America. I think that is what the plaques said. Maybe giants created the whole thing by stomping down. Probably not, but who’s to say? I am sure the Native Americans living in the area had their own explanations, but unfortunately there were no markers giving their side of the story. However you look at it, Garden of The Gods is pretty cool. The River to River Trail also passes through and a lot of people like to camp here.

Garden was happy to see us

Another sight that could do with a little more indigenous explanation is Millstone Bluff. This one is a wee bit less known and does involve a short jaunt on a gravel road. Thus far, archaeologists have discovered about a dozen “stone forts” in Little Egypt. The best known has been rebuilt and can be found at Giant City State Park. Who built them? Druids (sorry, I just read a good story concerning Stonehenge). Why were they built? At Giant City State Park the experts seem to think it was a holding pen for animals and/or grain. The archaeologists here see a military purpose. There are plenty of plaques that describe in some detail the petroglyphs discovered all over the surrounding rocks. But the actual petroglyphs are so faint (possibly from being touched and rubbed by previous tourists and excavations) that they really cannot be seen at all. I thought I made out a circle or two. Henna thinks not and was a bit disappointed in being unable to make out any animals (it didn’t help any that a couple of signs boasted about all the animal drawings that used to be clearly seen). There isn’t actually a stone fort, but there is a looted grave as well as, get ready, evidence of soil depression. We did enjoy the short but steep hike to the top of the bluff and the nifty views of the surrounding area. Maybe the rock artists were inspired by that same view. Noel 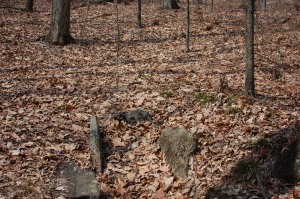 2 thoughts on “Southern Illinois Tales: Garden of the Gods and Millstone Bluff”