In the spirit of Passover and our own sense of irony, we journeyed back to Egypt this Spring Break. That is, we hung out in Illinois’ “Little Egypt” where the Mississippi flows past Thebes on its way to Cairo. We of course have a few stories to tell and would like to begin at Cave-In-Rock, Il.

A little spelunking at Cave-In-Rock

Cave-In-Rock is known for their cave in a rock adjacent to the Ohio River (which later meets up with the Mississippi at Cairo). Cave-In-Rock is just a tad west of the River to River trail’s beginning at Battery Rock (the River to River trail is a roughly 160 mile journey that wanders over some of the most beautiful land in the country). Lewis and Clark made some notes about the cave in their journey west and it has since been used by river pirates, Confederate soldiers, vagabonds, a movie or two, and at least one church. Today it is an easily accessible wonder with a good amount of spray painted graffiti on the cavernous walls. Like most attractions in Southern Illinois there were no rangers and few signs offering information related to the attraction. Just the cave, a few rusty playgrounds, a diner not yet opened for business, and a few apartment style rooms which offer great views of the river and enough room to spread out (Hennacornoeliday recommended). 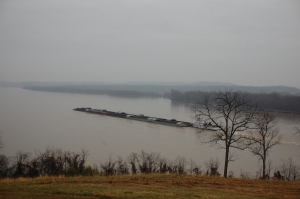 Cave-In-Rock is also a town that offers a car ferry service to Kentucky and one mighty good fish place called Dutton’s Café. Dutton’s Café’ was the type of place where a regular came by and went into the kitchen to talk to Mrs. Dutton while she breaded his fish. The food was awesome and included two hush puppies with every order (Henna groaned when I joked they were made with 100% puppy meat). We pestered Mrs. Dutton with questions until eventually she broke down and told us all we wanted to know about her town. Turns out she and her family are big Cub fans and on the wall next to framed articles about the town and its citizens was a picture of Ron Santo with two of her grand children. We also learned about the official state mineral fluorite which used to be mined around those parts in great quantities (until they “figured out it was cheaper just to import it.”) Later we met her very fit 96 year old father in law (who returned from a day fishing with some of the most mismatched and colorful duds I have ever seen), and another elderly (but not that elder) gentleman who retired from mining some time ago and is now, along with thousands of his mining brothers, looking to the courts to protect his pension. He was friendly and was quick to note that he did not say anything when he learned we were from Chicago. He also offered to take us out fishing if we ever found our way back to Cave-In. I have a pretty good idea where I might be able to find him if we decide to take him up on his offer. Noel