I am proud to say we spent our last full day on the trip the way we spent most of our trip; seeing new things and making friends.  Driving into Lincoln we were not so impressed and even a good fast food Mediterranean experience did not change that impression.  The area around the hotel had a gritty and industrial look and the downtown lacked that certain feel that Corey always talks about.  But the next afternoon we discovered something pretty cool:  Pioneers Park.  Pioneers Park is a couple hundred acres of parks, restored prairie, nature centers, ponds, thousands of bull frogs (which are a pest and not native to the area), turtles, two elk, a small herd of bison, a bald eagle, and several resident snakes and owls.  The birds were brought to the park by places like Raptor Rescue and had various injuries tended to (for example, the bald eagle was missing a wing and an owl was blind).   The staff working there were friendly and helpful.  Tending many of the animals was Drew who ended up spending a lot of time talking to us while misting the eagle and tending to the owls.  Drew and I talked nature but also camping as he is an avid tent camper and traveler.  The hours spent there made us forget the high heat and humidity (which is still pretty new to us after a summer traveling in the mountains and the coast). 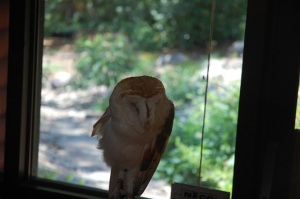 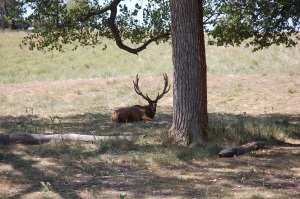 Four hours or so later we were off the interstate on mostly gravel roads in search of Ron and Phyllis’s farm.  Close to their house we saw a fox by the side of the road.  Ron and Phyllis are parents to our neighbor Chad who, along with his wife Alex, are visiting in part to celebrate his mother’s birthday.  I am happy to say that Chad’s parents are as nice and quick-witted as their son and it was a real treat drinking wine and eating pizza with them late into the night.  They live on top a low hill in a sturdy 140 year old house with sweeping views of the countryside.  One thing that amazed me was that the gravel road leading to their house used to be paved.  Then the state ran out of money and put it back to gravel. 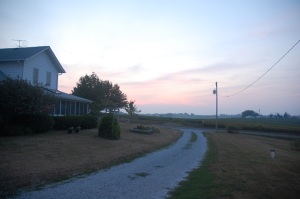 Henna spent a lot of time feeding sheep and playing with the kittens and cats that live in their barn.  Phyllis also made sure that Henna had enough cake and ice cream and right before going to bed Henna said that this was her favorite day of the trip.  Despite Ron and Phyllis repeated invitations of a guest bedroom, we chose to pitch a tent on the front lawn.  It just felt more fitting to do so.

So I woke up this morning in our tent; it was my 40th time doing so this summer.   The rain flap was not on and it was a cool morning despite the near 100 degree temperature the day before.  Right now I am typing these words on Ron and Phyllis’s front porch and the ladies are still sleeping.  Soon everyone will wake and I hope to have a cup of coffee.  Chad and Alex plan on taking us to a farmer’s market as well as a small grocery store they know that has an excellent beer and wine selection.  Afterwards we will take Interstate 80 to my mother in-law and then later still we will come home.  This trip will be over and I will begin to help plan the next one. 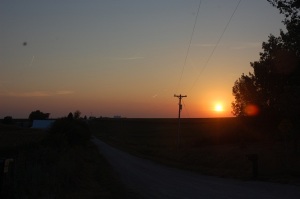