Pushing 6 weeks here and the last few days were wearing me down.  Yesterday revived me greatly though and ended around a gas fed fireplace with new friends playing tunes at our request.  Leading the group was a camper with a lot of guitar and vocal talent.  Joining him were the campground owners (who also had a lot of musical talents that included song writing) and a local Arco resident on keyboard.  Sherri (the matriach of the campground owners) not only warmly invited us into the circle, but also let Henna drum along on a hybrid tambourine/ bongo instrument.  Their daughter joined us too and spending the night at the KOA in Arco, ID felt almost as good as hanging out at Dan’s house in Santa Cruz.  While the sun set over the mountains I shut my eyes and felt the temperature dropping as my spirits rose.

Sherri and Neil were the last of several very cool people met yesterday while driving to Craters of the Moon National Monument.  We did not know what to expect both in terms of landscape and people and were pleasantly surprised by both.  First down the line was another Aussie (they are everywhere!).  It was off the interstate on HWY 20 with a lot of empty spaces in all direction.  At the Hill Saloon, the only business in town, there was a small general store, dusty pots with cold coffee, a former post office, and an old fashion bar in back with wooden floors.   All this was in a building smaller than a convenience store.  Tending bar (and the only person in the store other than us) was the aforementioned Aussie.  Unlike most Australians she was rather shy and volunteered little information.  When I asked how she ended up there, she stated that the owner had to go into the city for business.  I then asked how long she had been in Hill and she replied one month.  I felt like she left the best part of the story out.

At the National Monument we were treated to endless cooled lava fields than spewed some 2000 years ago.  Like much of Idaho and Wyoming and, for that matter, the entire west, the land beneath is a seismic mess and continues to pull, raise, and drop the land in sudden spurts.  The last big movement occurred in 1983 with an earthquake that saw the valley drop eight feet and a mountain rising a foot.  Every 2000 years ago lava flows freely.  The last time this happened was 2000 years ago.  Better see it quick. 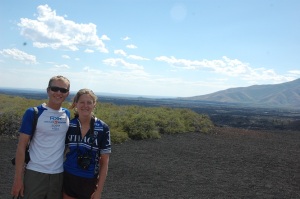 Craters of the Moon has a wonderful 7 mile loop with several short hikes that take you into the landscape.  We climbed a cinder cone, walked among the lava rocks, and explored a lava tube.  We also met a couple cycling from Michigan to the coast.  Teachers, they were doing this partly as a way to raise money for their school.  Talking with them we realized that they had been to many of the same places we have, but on bike.  While at the visitor’s center the supervisor of the park approached them, introduced himself as an avid cyclist, and invited them to crash at his house for the night.  He also had let them borrow a car to drive into town.  Later at the campground I met other educators, this time from the Netherlands.  Hank teaches students with Autism (age 15 to 22) and his wife (Katharina) is a counselor.  While their English was very good, they had trouble answering my questions related to what special education looks like in Europe.

My coffee is percolating, the ladies are sleeping, and we are headed to the Grand Tetons (Uncle Mike from Klamath said that name always cracks him up) today.  We might spend up to five nights there; we might not.  Either way we are going to enjoy our last week and change on the road as much as we can.  Talk to you all soon.