The odometer said we only did 64 miles yesterday.  We sure did get our moneys’ worth from those miles.

Mendocino is an artist colony, an expensive weekend destination (rooms with a shared bath start at $165), a hippie commune (the local grocery store is an organic only co-op; when we pulled in to town a group of men varying in ages from late teens to middle age where “making music” with their hands and an odd assortment of musical instruments and they did not look out of place), an artist colony, and a nature lovers paradise as the whole place seems to melt into the surrounding cliffs.  All these different directions seem to pull the town a bit and not all the residents were welcoming to visitors.  Besides the various store signs prohibiting cell phone usage, a shop keeper was visibly annoyed when I asked directions, another shop (a cute wine store) closed for a lunch break (with the shop keeper munching on a sandwich at the counter), and everyone there, visitor and resident alike, seemed to take pride in not being of or at somewhere else.  But it made for a wonderful visit complete with book shopping (for Henna) and cliff strolling. 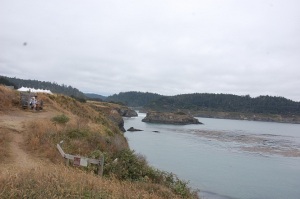 A mile or so north of Mendocino is the Russian River Gulch State Park.  The park advertises 12 miles of hiking trails with the most popular of those miles leading to a waterfall.  Our last serious hike was up Mt. Hoffman in Yosemite so we were pretty excited to take on the challenge.  The trail meandered on a slight but steady incline past a few redwood stumps, at least one whole redwood, and into a fern lined jungle.  It reminded us a lot of being on Washington’s coast.  Henna loved the banana slugs and especially enjoyed stroking their tops so that their antennas withdrew.  A good time was held by all. 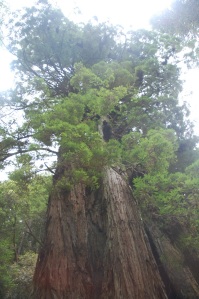 Three years ago we combed the beach for washed up and polished glass (the beach is covered with this beautiful garbage) only for me to accidentally throw it all out the next day (Corey never should of stored all the glass in a used Styrofoam coffee cup).  This was Henna’s chance to replenish.  While Corey and Henna picked through the garbage I wandered the cliffs and saw many sea lions.  I also talked to a young couple from Sacramento who were incredulous that I considered them to be close to home.  I later told them I was maybe 800 miles from home.  Like almost everyone I have met in California, they showed no interest in how it is was I ended up talking to them.  In Nebraska (a mere two states away) people asked my route, my impression of their state, and possibly my political orientation (religious and sexual orientation however were off the table).  Here in the Bear Republic people just assumed we dropped in from the sky. They also maybe felt a little sorry for us that we were from somewhere else.  They never seemed interested in any way in how we got there, what we were doing close to their home, and what we might think of their state.  (note:  a little after writing this a neighbor at Humbolt Redwood State Park on a road trip that started in Central California approached us, along with his dairy dog, to ask us about our trip). 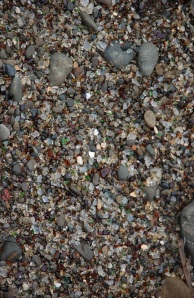 It was a fitting end to our journey up the coast.  It was my favorite and least favorite campground of the trip.  It was dirty, disorganized and a free for all.  Music blared all night and, mixed in among the usual types (older RVers, European travelers, and families seeing the country) where locals looking to party.  But, for $5 extra, you could camp on the beach.  The surf proved louder than the party goers and the sand made for an excellent bed.  We had space, privacy (and it was the darkest night of the trip), a good fire, and one of the few remaining picnic tables.  The tables were rare because a few nights ago men came in the middle of the night and stole them right off the beach (this was probably a prank as the tables were found at a nearby beach- the owners had not bothered to pick them up yet).  Before sun set Henna and I explored the beach and she twirled to her hearts content (and lost most of the glass she had picked up earlier).  It never actually rained, but all night the mist came from the sea and soaked everything.  And Corey and I laughed while sipping expensive wine.