Leaving Las Vegas we had two choices:  a quick run to the coast or a ramble into the Sierras.  It could have gone either way but we chose the latter.  And, sitting here by a fire and typing up these words I am glad we made the choice we did. 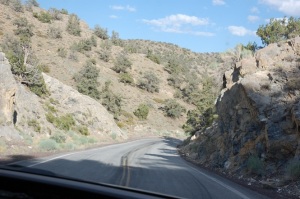 20 minutes north of Vegas on 95 and we were out in some serious desert (the kind of desert where the mobsters dump the bodies).  And this desert continued for quite a long time with some scrubby bushes, interesting cactuses and dusty mountains to both sides.  At a small, indiscrete road Corey told me to make a left heading straight west into California.  There was no tar on the road and a sign said not to go over 35MPH.  Another sign said not to expect gas for 56 miles.  The road led into the dusty mountains and I noticed that oncoming cars had big canisters of gas and water strapped to their sides.  Not the sign I was looking for.

As the road began to switchback I questioned Corey’s route.  She asked if I would prefer going through Death Valley.  I would have come back with a good one, but right then the road began to narrow to such a degree I was concerned our car might scrape against some cliffs.  The switchbacks continued and desert became short trees which became small forests and the temperature dropped to below 80.  And still we climbed and just when the view became good, we dropped and the forest faded as the heat rose.  Around one bend there was a pull out and some ruins.  A small sign said that there was once a small mining town there (Palmetto).  We explored and in doing so found many rusted tin cans and pottery shards (could have been a few days old, could have been a few thousand years old).  Another family was also playing around the bricks and it felt good to be on this crazy road somewhere between Nevada and California. 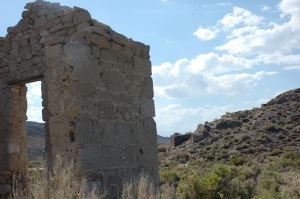 I am not sure exactly when we entered California as there was no sign greeting us.  This distressed me a little and I felt cheated out of knowing the exact moment when you cross into a new state.  The road in California was even windier than before and filled with dips that sometimes prevented me from seeing beyond a few feet of pavement (like a ship cresting a wave).  One bend warned of a single lane ahead.   Just to be on the safe side I beeped my horn just before making the turn and was surprised to hear an answering honk.  Another piece of road found a group of cows being herded across the street by men on horseback.  For a moment I feared that I took a wrong turn into the past century.   The only real blemish to the trip was us not having time to check out the Ancient Bristle Pine Cone area (7,000 year old living tress, the oldest living plants in the world).  On the plus side we have a good reason now to come back.

Eventually we came to 395 and everything was green and prosperous looking.  In Owens Valley (more things to make me homesick, we also looked for Glen’s brewery, Jean’s bookshop, and Griffin’s art studio) the Sierras were to our left, the dusty Nevada mountains to the right.  Tired we stumbled into Mammoth Lakes and decided to spend a few days here before heading to Yosemite on Sunday (a good day to find campsites).

We woke up today happy to be in the Sierras.  Henna overslept, I read and texted my dad and a friend in Wisconsin, and Corey joined me for a cup of coffee.  Before leaving for the day’s adventure I asked an older couple advice regarding possible area hikes.  John and I started talking (and his companion talked to Corey) and I soon found out that he served as a crew member on Air Force One for six presidents (Eisenhower insisted on being called general, Ford was very friendly and often draped an arm over his shoulders, Johnson was feared by everyone except his wife and J. Edgar Hoover, Carter was a stick in the mud).  John was a good guy to talk to but baited me into political discussions (Me:  “I love camping.”  Him:  “It’s all going to go away (high gas prices) if we reelect this Marxist President.”)  A good balance to John was his wife whom heads a non-profit focused on helping high school drop outs get their GED. While Corey and her talked about the need for a more comprehensive approach to education, John and I debated whether or not death panels were going to decide my future health options. 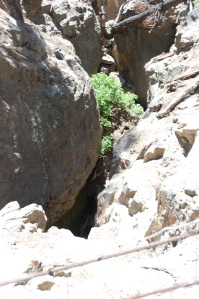 Our day later involved standing next to a fault line, a long wait for a bus, a crazy standing room only bus ride down from a mountain, and a cool hike leading to Rainbow Falls and Devil’s Postpile National Monument.  It all felt like what I imagine Yosemite to feel like for a reason; prior to the early 20th century it was part of the national park.  Mining interests, however, wanted to exploit the area and select parcels of land where kicked out of the park (and then later protected as a national monument).  You are not allowed to drive the road in (probably due to it being one lane for a few stretches) and for that reason we paid for a shuttle to take us to the trail head.  While waiting we met a married couple from Anchorage and found out that he is a special education teacher who works primarily with children that have autism.  Another commonality was that her birthday is close to Corey and her father works very hard as a freelance writer (but has a different day job).  They were headed off on a three night excursion with tripods and expensive camera gear in order to reproduce Ansel Adams work.  Many of his photos feature lakes in this area.    The hiking was good, the return bus trip scary, and laundry was postponed for another day.