I agree with Corey that it felt good to get back on the road.  The night before I was staring at the map and found, just a tad off of our route, Hitchcock Ghost Town.  Amazingly, it appeared that the ghost town was on a small road that connected 285 to 50 which meant no backtracking!  Well, not exactly.  We followed Mr. Rand McNally to that small country road and were surprised to discover very cute second homes mixed in with the delights of the San Isabel National Forest.  Campgrounds, hiking trails, and aspen groves made up the foreground and a 14,000’ mountain in the background completed the picture nicely.  We pulled over for what we assumed would be an easy half mile hike to the Agnes Vaille Waterfall.  However, steepness, a hot sun, and limited shade made this much more challenging than we expected.  The waterfall jutting out of jagged rocks made for an excellent payoff.   Everything here is beginning to feel a bit Southwest. 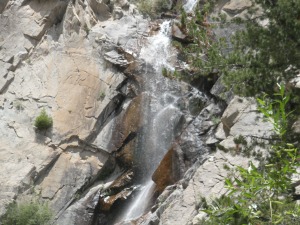 But Mr. Rand McNally neglected to mention that the ghost town entailed a five-mile one lane gravel road.  We started it, decided it was getting late, and put it in reverse.  On the way out another Outback made for the same road.  We asked them what they knew about the road and the driver said that her friends said the road was not too bad.  Our road continued to St. Elmo and then ended.  Just like that.  There was no continuation to 50.  We asked a man with an ATV and he said there was no way to 50 except to backtrack to where we started.  He also said that we would have had no chance to make it to Hitchcock in what we were driving.  One gravel road, two opinions.  Maybe that road would have let out at 50?  We will never know.  I hope the other Outback had no trouble.

Before all that we stopped off in Southpark, CO.  A store owner told us that one of the creators of Southpark spent part of his high school years here and modeled the cartoon town after Southpark.  Besides a lot of Southpark stickers for sale there were also a lot of restored building and a seemingly cool museum to go to (we however took a pass). Kenny, however, was nowhere to be found.

So now I am back in the tent.  Understandably there are still no campfires allowed by us.  Parts of Colorado did get some rain today, but I am not sure if the fires got any relief.  While making dinner however two separate storm fronts moved in with big gusts of wind and quick drops in temperature.  Only a few drops though. The owner of the KOA here is quite colorful.  With a red face and a very loud, theatrical voice it is hard to tell if he is overly friendly or inebriated.  Either way he later let us into his backyard where Henna befriended two German goats (Fritz and Dieter) and a very friendly steer.  Henna called this her favorite campground ever. Later we drove to a very cool park that had one of the tallest slides ever.  Although crowded, we were the only tourists there.  Hints like that of real life as well as the friendly but sequestered feel of Gunnison really made us like the town.  Tomorrow it is off to Black Canyon of the Gunnison NP and maybe Ouray.  We have high hopes for Ouray, we will let you know if it lives up to our expectations.