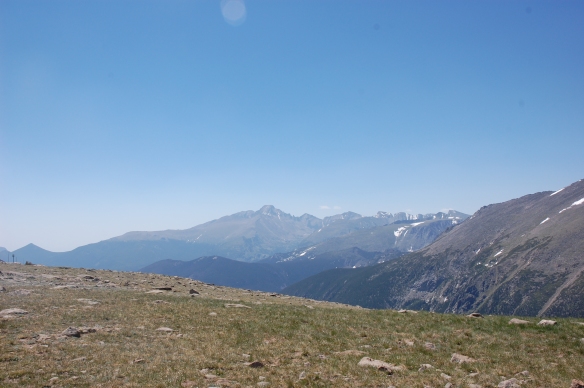 Along the Trail Ridge Highway

Yesterday was all about altitude and heat. We left Moraine Park, but not before I saw a giant hawk devour his morning breakfast (an unlucky chipmunk) on the way to the bathroom.  Every morning on this trip I have woken with the sun and sometimes I have seen the darndest things.  It was hot by the time we left but very cold and windy along the Trail Ridge Road (at +12,000′ high it is the highest public road in America).  Besides glaciers and peaks, we also saw are first views of the wildfires.  Terrifying.  And the bits of over heard conversations were not at all comforting (“Jumped a highway, hell the fire jumped a river.”)  Not much we can do to help other than obey all the fire restrictions and get out of the way of those who can help.

We dawdled then drove down back to the scorching sun and camped at a pretty lake we think was Arapaho Lake.  The Colorado River comes into this valley wild and is tamed by a dam into a giant lake (with a trickle allowed to continue and eventually pour through the Grand Canyon).  There were few trees (Pine Beatle Infestation), a high sun, temps in the high 80s, and a very cold lake.  So we baked at the beach then explored Gramby where we dined on yummy pizza slices.  The laid back owner told us of a children’s fishing pond at the park and away we went.  Henna caught two little fish.  I caught an even smaller fish.  Returned to the campsite and listened to a great cover band playing outside at a nearby bar.  By 11 a less talented but louder band began to play.  They played until past 2 with me drifting off to sleep only to be jerked awake by a sudden guitar riff or someone yelling into the microphone.  By that time the sun was long gone so I shivered mightily listening to a lousy band play on and on and on.  But I did not feel homesick (and Corey and Henna never stirred from their sleep).  Rather it felt like an adventure and that morning, after waking with the sun at 5:30, I returned to the tent to snooze past 7. 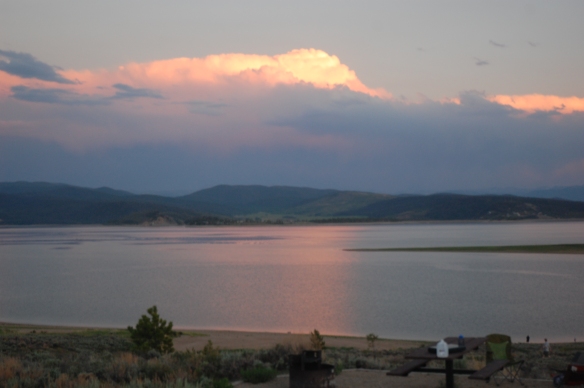 It is very nice to be writing this post in my parent’s timeshare at Breckenridge.  Corey is frying up some sausages to add to a pasta dish Henna and her thought up.  8 days’ worth of laundry is making its way through the laundry machines and I feel cleaner than I have ever felt before.