Yesterday was the first day of the trip waking up somewhere other than my own bed.  It felt good.  It was a cool morning and it felt good making coffee and reading while the ladies slept.  “While the ladies slept” can probably be inserted in each post I ever write concerning the morning.  Right now I am typing away on the shaded porch of a KOA cabin while, you guessed it, the ladies sleep.  The coffee is just about to percolate.

Woke up and continued on HWY 20.  It’s actually an interstate between Dubuque and Fort Dodge and while it continued as a divided four lane road we passed the usual suspects:  Holiday Inns, Olive Gardens, etc.  Sometime west of Fort Dodge the route began and the towns were typed in a smaller font.  In between the two rivers (Mississippi and Missouri) Iowa deserves its flat reputation.  Very quiet too.  The long since closed and decaying rural store is a very sad but commonplace elsewhere; in Iowa it was just church day.  Even some grocery stores we closed and we ended up tailgating our lunch in a McDonald’s parking lot.  For dessert we bout ice cream cones and coffees then used their wi-fi to post a blog entry.

Entered Sioux City around 3 and searched for a state park.  A couple of years ago I bought a National Geographic Book focused on the best state parks in the country.  Stone Park made the list and we wanted to check it out.  By this time it was in the high 80s and humid making a swimming pool also appealing.  So we decided to hike in the park then swim and camp at the KOA.  Most plans do not work the way they are drawn up and this was no exception.  We got lost and stumbled into the  KOA first (but not before driving a bit through Sioux Falls; run down in parts but has a nifty newer area with a cool but closed for Sunday art museum).  They gave us direction and we spent a couple of hours at the adjacent nature center and then state park.  Quick geo lesson:  Loess refers to the rock sand created by the glaciers.  This loess (pronounced luss) eventually filled up the Missouri River Valley and then was blown by winds east all over Iowa.  In the  Loess Hills (the source area) they can be up to sixty feet deep.  Only somewhere in China is this landscape duplicated.

Well, the coffee is ready, the ladies still sleep, and I want to get back into my book (The Old Patagonia Express by Paul Theroux).  Hopefully when I post this it will have some pictures attached. 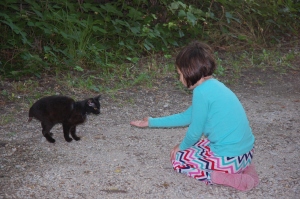 Good news! I was able to post some pictures.  Today was exciting, fun, and involved clown dolls and fossils as well as some river swimming.  The ladies are trying to bum dish soap as we seemed to have left ours behind, the day is cooling off, and the flies are starting to bite.  Tell you all about it soon.