Sure, nature makes a great playground, but so does man (and woman).  Here are some of our favorite mechanical attractions. 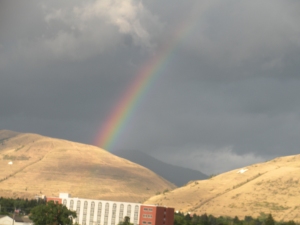 Corey and I have been there twice, but only once with Henna (the first was as newlyweds on our return trip from Alaska).  In the ten or so years between visits we changed much, the fair not so much (although we did miss the horse racing present on our first trip).  That is a good thing.  Both times there we wandered through prize cows and llamas as well as other questionable western livestock and dined on funnel cakes and other tasty fried treats.  Corey does not like things that spin her, but Henna does and the two of us enjoyed watching rainbows from the Ferris wheel. 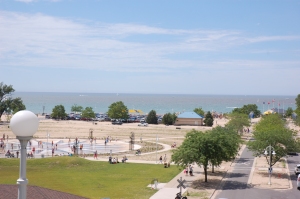 Where there was once a religious retreat there is now an awesome beach, playground, and carousel.  All of it sits below the down town area where ornamental cannons stand guard.  Upstairs (at grade level) is an OK children’s museum as well as several ice cream shops.  Parking is cheap or free, no beach fees at all, and the carousel will not cost you more than a few dollars.  What is there not to like?

The Carousels of Oregon 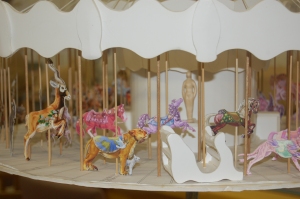 Salem and Albany Oregon both have sister cities near the east coast and love things that go round and round.  In Albany volunteer workers have been spending the last several years carving and painting works to complement a restored 1909 Dentzel machine that will ultimately power their creation.  Donations and visitors are always welcomed and our short time there felt like being in a dream factory.

Salem residents and tourists have been enjoying their carousel for some time.  The carousel is housed in a small building within a larger green park a short distance (but a busy street crossing) from the downtown area.  Incidentally, the Salem visitor center is the only center I know that sells bottles of wine from a nearby winery.

We have not made the final selections yet, but I think we are going to omit this park from our Great City Park list (the Lakefront though is still in the running).  As consolation prize, we will mention our hometown park on our great man made attraction list.  The reason for this lofty honor, the cool off factor.  Not much in Chicago is free, but standing under a giant waterfall and dodging underground sprinklers is.  And we love it.

Do you have a favorite playground?  Please, Hennacornoeli minds want to know.