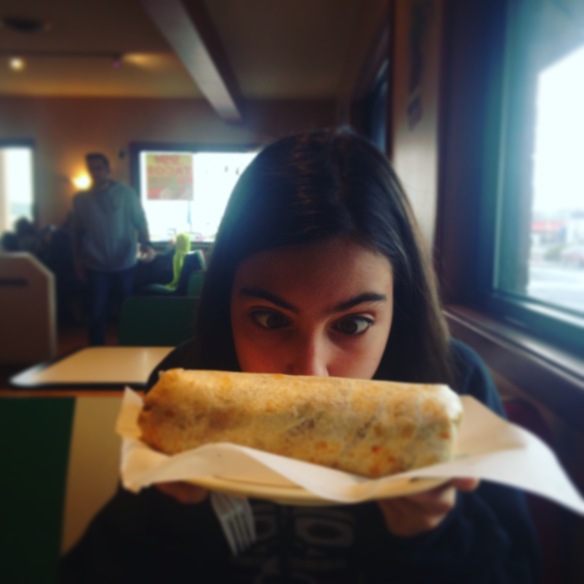 Burrito as big as Henna’s head

After a wonderful Christmas down south in Hegewisch, we are headed further south to the Big Easy. Henna does have a bad cold but the kind folks at Effingham’s Urgent Care assured us she probably will start feeling better soon. So with a menorah in the back seat and candles to burn, we are ready to begin a new adventure. First stop off the interstate was La Bamba.

Always open well after last call and featuring “burritos as big as your head,” La Bamba has been a fixture in Champaign since 1987. Begun by two brothers, Ramiro and Antonio Aguas, La Bamba now has eight locations spread out over four states. Amazingly, the restaurants do not use freezers or fryers which results in a very fresh product. Henna and Corey are big fans of their veggie burritos. I like their tortas. The burritos, by the way, are available in several sizes including one that is definitely bigger than even my head.

The winter sky over the flat Illinois farm land

The days are a lot shorter in winter and hotels frown upon starting camp fires so we end up watching a bit more television than we do in the summer (which, if you ask me, involves way too much Food Network; I mean come on, how many times can anyone watch a future groom and bride fight over their wedding cake. And honestly, if you cannot compromise over a cake I’m not sure you should even get married). We also order a lot more pizza. Tonight’s pizzeria  told me that they were running low on dough so they were only making medium size pizza which would then be  delivered to us in about two hours. Our options were a bit limited so we added a salad and it was all delivered ninety minutes later without napkins or forks. The pizza, although cold, was actually pretty good. And when the ladies were not looking I switched the channel to watch some football.