Just like last year, we visited family and are treated to a royal feast. This time it was salmon caught by Corey’s second cousin Phillip (who we’ve never met) and grilled up by his brother David who, along with his daughter Mariah, we are lucky to know quite well. As amazing as the seafood was, so were the potato and kale salads brought by Pam, Dan, Susan, and Mike. Our Ladysmith cousins sure do know how to make us feel at home.

The next day we wolfed down the leftovers right before exploring Strathcona Provincial Park with David and Mariah. Located a few hours north of Victoria, Strathcona offers up some of the most rugged landscape on Vancouver Island. After four and a half hours of hiking through a fern draped wonderland that included an impressive beaver dam and a whole lot of hanging moss, we set up camp a few kilometers shy of Landslide Lake. We then spent the next day contemplating the lake while Mariah caught two good sized trout with cheddar flavored meal worms (a souvenir from Victoria’s Bug Zoo and they actually do not taste half bad). The first we fried up on a small skillet with Mariah letting the second one go. Day three was a long hike back to the car and then a hauntingly desolate ride up to Port Hardy. Three showers later we are toasty and maybe a bit nervous about the road ahead. A lot of people asked us before we left how long it would take to get to Alaska. Well, we almost have an answer. Tomorrow we land in Prince Rupert, B.C. and then the next day we cross into Alaska. So far it has been one heck of a trip.

Noel and Henna struggle to land a fish. 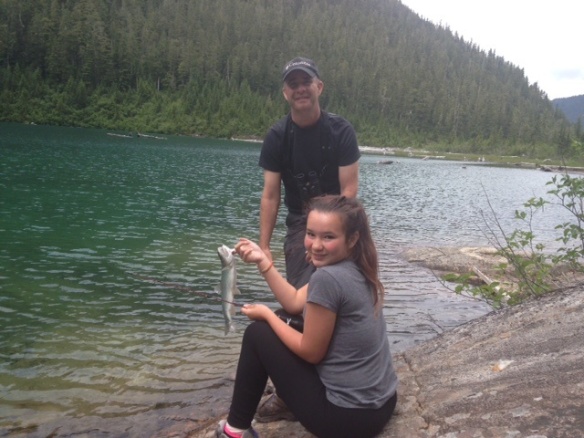 Mariah shows us how it’s done.

At Landslide Lake. 10 KM hike; 600 meter elevation gain but only a few switch backs. Trail a little difficult to follow the final kilometer. 2 campsite, one at 6 KM and the other at 9 KM. The second one is worth the longer hike.